The NBA was looking like it was going to have a real feel good day. The bad guy had been banished, for the first time in decades people approved of an NBA commissioner, and a playoff series for the ages appeared destined for double-overtime.

Then Joey Crawford did this.

We all know that Joey is a self-aggrandizing drama queen, but messing with a guy while he's trying to tie a playoff game in overtime may just have set a new standard for ref dickishness.

Two quotes really capture the moment: the announcer saying, "Durant now, poised at the line, (shrill whistle) with a chance to tie" and Crawford angrily yelling "listen to me".

I can't help but notice Durant's signature shoulder shimmy was missing on his 2nd attempt.

I'm not saying Joey caused Durant to miss, but it's undeniable that he disrupted the game and caused players, coaches, announcers, and the audience to wonder what the hell he was doing.

This all makes me wonder whether all this attention Sterling got made Joey a little jealous. One way or another, Joey made a bold statement: you can banish one of us pricks, but you can't banish us all. He's right too. The league still has lots of problems. It's easy to point at the bad guy and then feel good afterwards, but the NBA isn't going to be reformed so easily. Yesterday, the world saw the NBA take a big step towards becoming a better league, but it's clear that there is a long, hard climb ahead.

Now if only someone can find a floozy to record some of Joey's private conversations...

Sorry... I could try to make excuses or offer explanations, but instead, I'm just going to say I'm sorry for not posting for so long.

However, I couldn't resist the opportunity to tell Donald Sterling to suck it.

Suck it, Donald Sterling; suck it long and suck it hard. 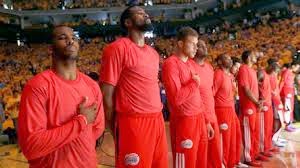 You have been a douchebag for a long time, Donald Sterling, and now the chickens are finally coming home to roost. Basketball fans have known for decades that you are a douchebag, but now the whole world knows.

Although I'm not a fan of having to look at Sterling's grotesquely melted face, I'm happy to see it plastered across the headlines. Hopefully this incident will give the NBA the excuse it needs to finally liberate the Clipper Nation from this despot.

It goes without saying that Clippers fans have suffered a lot over the years. Now that they have actually become a contender, the actions of their owner are once again turning the world's attention to the problems within the organization, discouraging all the effort that's been undertaken to legitimize this franchise.

I know that there are a lot of people out there who would enjoy seeing CP3 or Blake Griffin accepting an NBA Finals MVP award. Somehow, I doubt there are too many who want to see Sterling ooze up beside them.

So, suck it Sterling. Suck it long and suck it hard.

In the words of the president, "When ignorant folks want to advertise their ignorance, you don't really have to do anything. You just let them talk".

It's time for the NBA to shut Sterling up. Adam Silver may still be new to the job, but he has a chance to begin defining his legacy here. The question is whether he wants to be like his predecessor, standing around and listening to Sterling's crap while doing nothing, or is the new commissioner actually going to step up and make the NBA a better place.

A place without Donald Sterling.

Who can suck it.

Suck it long, and suck it hard.

Word of the Day
Previous Posts
The Final Word (for now ... )
Show Awards and No Surprises
The Summer of LeBron has Begun
Sports Writer Writes Something Stupid
Save your eyes
Unfinished Business
Lo and Behold
Parker Strikes Back: Meme Wars
Schadenfreude
The Clippers got Jack