Training camps are underway, and the NBA preseason has now begun. It's been a very active offseason. With so many trades, signings, and front office moves, it's been hard to keep up with them all. However, there were a few things that jumped out to me this summer. Today I want to countdown the five most bizarre or unusual happenings from around the Association.

After three microfracture surgeries, battling alcohol addiction, and a long rehab process, Greg Oden is now back on an NBA roster. Believe it or not, there was a mini bidding war for his services. Oden had offers to play for several teams but opted to join the defending champion Miami Heat. After being waived by the Trailblazers, many thought that he would never play professional basketball ever again. It's a pretty ideal situation as he'll walk into training camp with zero expectations. The Heat have won back to back titles with center rotation that consist of crap, shit, and trash. All Oden has to do is lumber up the floor, flail his arms at opposing shooters, and dunk once or twice a game. THAT'S IT. As long as he's healthy he should have the starting spot on lockdown. As long as he's healthy... He doesn't even need to reach his original potential. Somewhere in the neighborhood of 8 points and 8 rebounds and the Miami Heat have the title in the bag. This is isn't Portland, where the fans are almost rabid about their basketball team. He's isn't seen as the number 1 pick who was taken ahead of Kevin Durant. He enters the Heat training camp as just another center in a city that only sometimes cares about professional basketball. 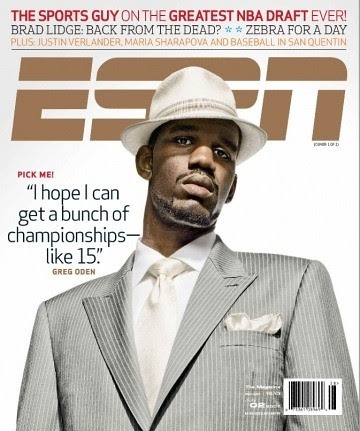 2. Lionel Hollins and George Karl are no longer employed as coaches.

In today's budget conscious NBA, teams like the Nuggets and the Grizzlies had to cut back on the spending. As a result, two of the best coaches from last season would not return to their respective teams. They were basically shown the door because they were too good. Seriously, George Karl won the goddamn NBA Coach of the Year award. The Denver Nuggets finished third in the conference even though not a single player made the All Star team last year. Hollins got the Grizzlies to the Conference Finals, a first in the franchise's history. An amazing feat considering that snake, John Hollinger traded away Rudy Gay, the team's leading scorer for Tayshaun "Bad Back and Even Worse Contract" Prince. I don't have a freaking clue who the new Grizzlies coach is. (After Googling the answer, I still don't know this guy.) I hope head coaches of small market teams were paying attention. If you value your job, just make sure you have a very mediocre season, and don't expect pay increase on your next contract. 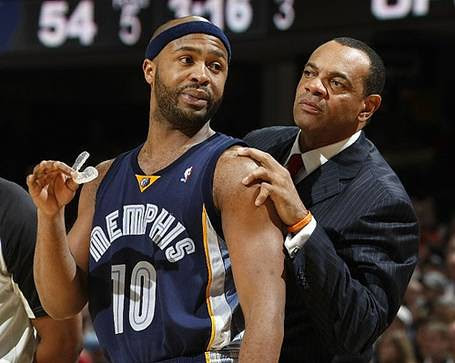 They could have at least offered to have his gargoyle hand fixed.
3. Jason Kidd and Rasheed Wallace are employed as coaches.

When Jason Kidd was playing everyone always said how he was like a coach on the floor. Directing traffic, calling out the plays himself, finding weak points in the defense. But I didn't expect him to retire, and then immediately jump straight into the head coaches office. Normally guys have to pay their dues as an assistant or a player development coach. After that begins a series of interviews each offseason in which they get their dreams shattered over and over and over again by potential teams....It’s a process. But Ol' J Kidd here somehow convinced Nets owner Mikhail Prokhorov to give him a shot despite having the same amount of coaching experience as....me. Patrick Ewing hates Jason Kidd. He's already off to a rocky start. Kidd has to sit out the first two games of the season because he got shitfaced in the Hamptons last year and wrecked his SUV. Speaking of wrecks, Rasheed Wallace ladies and gentlemen. Who the hell thought it'd be a good idea to let him hang around impressionable youths? Does Greg Monroe really need to be taking advise from Rasheed? What is he gonna teach him? How to trot of the floor and launch three's? How to get tossed out of games? How to be a millionaire, but still manage to look like a total bum? Where he can get the best weed in Detroit? How to have an unstoppable turn around baseline jumper but only pull it out twice a game? The only good thing that will come out of this...and I mean the ONLY good thing, is that we might get to hear him scream, "BALL DON'T LIE!!!" 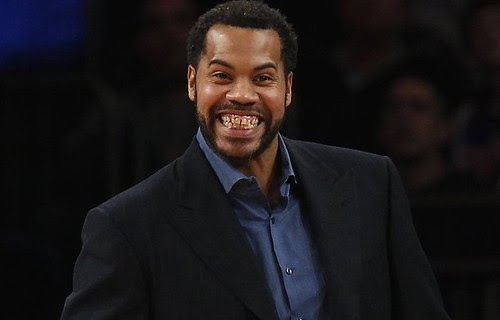 Coming to a sideline near you.

4. Shaquille O'Neal is an owner.

My Initial reaction to the news of Shaq becoming part owner of the Sacramento Kings? "Please, Please, PLEASE let this be the end of Shaq as a television analyst". He's just not funny. Shaq's style of humor works best during courtside interviews or after the game in the locker room. He's sports funny. That's the guy who's funny amongst a group of people who are kinda dull. In terms of real world funny he's horrible. Laughing at his own jokes...repeating them over and over when they don't go over well...GET HIM OFF MY TV. Where was I? Ah yes, Shaq the owner. I feel bad for Kings fans. This guy kept your team from getting to the Finals, and playfully referred to them as the Sacramento "Queens" for many years. (Another joke that only works if you're an athlete.) Now you have to drive around town looking up at billboards that have his big dumbass grin on it. With the word "Shaqramento" underneath. That's like Batman capturing the Joker and then becoming warden at Arkham Asylum. 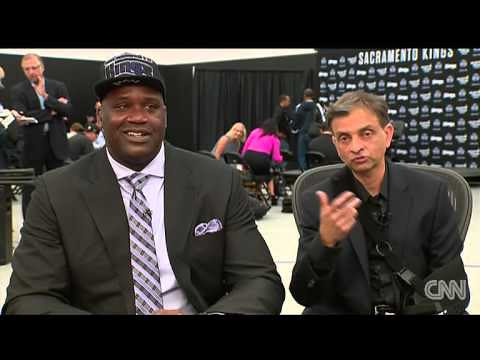 Majority owner Vivek Ranandive explaining how the Kings plan on helping the Sacramento community while Shaq eyeballs a meat and cheese tray in the corner.

This one is most bizarre because I'm not sure if anyone knows they entire story. I've been scouring the net, and it’s hard to tell which parts of the Odom offseason saga are bullshit, and which parts are true. It doesn't help that TMZ, who are known for making things up, has been all over this since day one. They reported that Odom was missing, and not even his wife knew where he was. TMZ had us thinking Lam Lam could have been laying face down in a ditch somewhere. Then they claimed he was off somewhere smoking crack with a couple of whores. Well, it seems that Odom's friends and family did know where he was, however all that stuff about him being on drugs was true. And it was also true that he got arrested for a DUI. Annnnd it was true that he had to check himself in to rehab. Annnnnnnnd it was true that he promptly check himself out of rehab claiming that he could stop using drugs on his own. If I had to guess, I'd say he's done as a professional athlete. The Lakers trying to trade him to New Orleans a few years ago was the worst thing that could have happened to his career. Ever since that day, Odom has been on a downward spiral. It looked like he had an opportunity to redeem himself with the Clippers last season, but I wasn't expecting him to totally blow it. Most nights he looked like someone's grandpa who just wondered onto the floor during a game. I'm going to miss seeing him mail it in night in and night out. 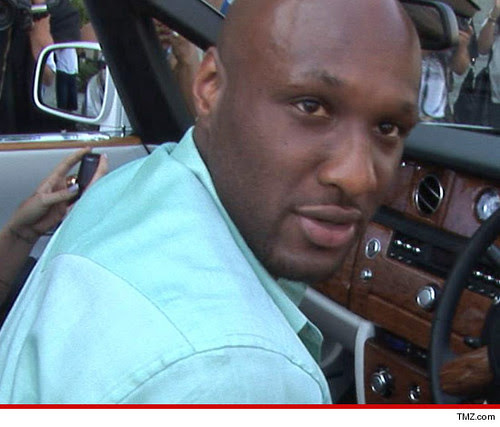 "Did someone say blow?"

amas92 said...
Don't know if this blog still gets updated regularly. I used to frequent it a lot in it's heyday and loved every recap, but was having a conversation on twitter with some basketball blog folk. Would like to see this blog/format revived and revitalized in some way so that it can become a sort of force again like when it was regularly linked in Truehoop and made some amazing videos.

Jason, not sure if Bawful and Ted have retired from it. Would like to hear what direction you want to take it into. I'm not the guy to implement such a thing, but I'm a longtime fan who'd like to know all the same.

European NBA Fan said...
This is so Basketbawful, that it almost deserves a Toronto mascot fail (except the Celtics also fail in the end):

European NBA Fan said...
Sorry, I hadn't realized that the Toronto Raptors mascot is out for the season:

Fishy said...
I sometimes wonder why I still check this site but then I get randomly rewarded. Nice and funny post :) your Shaq isn't funny bit had me chuckling
10/18/2013 9:35 PM

Anonymous said...
Rasheed is smart dude and well respected around the league. He was a skilled player, an elite post defender, a tough dude and a good teammate. I don't understand why it wouldn't translate into coaching. As a Pistons fan I'm glad that he's on the bench. And btw, the first ball don't lie already happened: http://www.youtube.com/watch?v=GflytjUIf38
10/20/2013 12:19 AM

Word of the Day
Previous Posts
JR Smith: The NBA's leader in not giving a shit
What I've been up to...
Profiling the Pros: John Wall
Your 2013 Free Agency Primer: Part 1
Dwightpocalypse Now
Fuck you, Ray Allen
Game 6: Live Blogging
Beating the Heat in 4 Not So Easy Steps
Game 2
Game 1