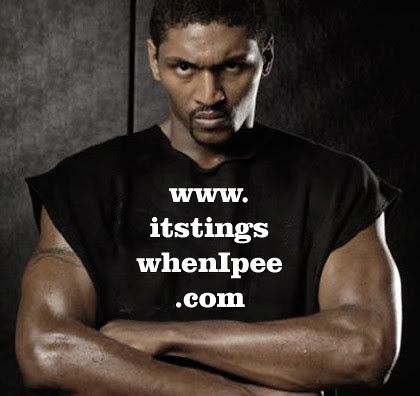 Well, of course, the lockout continues, and the most almost-intriguing thing that happened this summer is not Kobe maybe going to Turkey or Noah to France or Luol Deng to Britain. (Question: Luol Deng goes to Britain, and all of the sudden there's endless rioting in the streets - coincidence? I think not. I always knew that dude was up to no good.)

Yes, the most semi-interesting thing to happen this summer is Ron Artest changing his name to Metta World Peace. Leave it to Ron Ron to put a new spin on changing your name. He probably would have kept it simple, like changing his name to Ron Treinta y Siete, to reflect last year's jersey number (lucky for him Michael Jackson's Thriller didn't top the charts for 24-straight weeks. Woo-hah, that woulda been a tussle), or Ron Quince, to reflect his new-slash-old jersey number, but of course, Chad Johnson (now Chad Ochocinco) beat him to that idea. So Ron had to come up with something to make himself look like even more of a diva-slash-wacko than an NFL wide receiver.

Not an easy task.

But before I get all revved up about this supposed name change, I decided to determine if this new moniker goes beyond Ron just looking to fill his day with something other than XBox and weed by mumbling to a random reporter, "Hey, my name is Metta World Peace now."

So when I go to www.ronartest.com, I would assume I should be automatically redirected to www.mettaworldpeace.com, right? Nope. And mettaworldpeace.com? It's still out there, waiting to be purchased. Give Google your money and you can have it. Go on. I dare ya. It'll be the best money you ever flushed down the toilet. I can just see you trying to call Ron's "people" on the phone:

You: "Guess what? I own the rights to mettaworldpeace.com, my friend. You want it? It's yours for 10 grand."

(whichever of Ron's posse you've managed to reach on the phone): "Yeah, um, Ron is now going by the name Lemonjello Fruitalicious. He had some lemon Jello today that he thought was, in his words, 'fruitalicious,' so that's his name now. You got the rights to lemonjellofruitalicious.com?"

(whichever of Ron's posse you've managed to reach on the phone): "Well I'm online right now and I just bought it. So kiss off, loser. Oh, and remember to visit lemonjellofruitalicious.com for all your latest Ron Artest news, k?"

A word of advice to Ron: If you're going to do this, do it for real. Chad Ochocinco is, naturally, to be found at www.ochocinco.com, and of course, he's got his wallpaper updated to read "WIDE RECEIVER NEW ENGLAND PATRIOTS." (I'm surprised it doesn't also say "No longer with those f***ing Bengals" in fine print below that). Now, THAT'S a dude managing his brand, taking charge of his identity shifts with the gusto of Madonna and the Artist Formerly known as Prince.

But with you, Ron, this Metta World Peace thing just seems flung together, bro. Where's my official Web site? Where's my T-shirt? Where's my breakfast cereal? 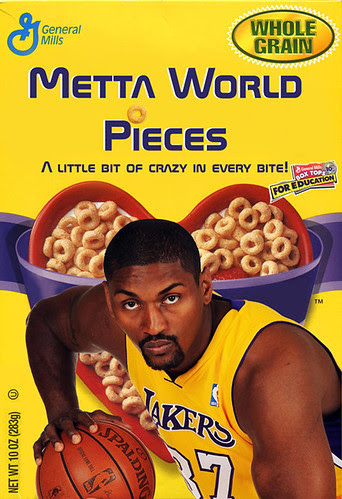 Alas, all we have is ronartest.com, and I'm tempted to say this isn't actually Ron Ron's official site, given his curious musings page, which calls attention to the war in Afghanistan, water conservation policy, and deep sea oil drilling. Does Ron Artest really think about these things? I mean, I suppose it's possible. He clearly has a conscience, given his selfless decision to sell his Laker ring for charity.

But for some reason (or many reasons), I have this notion that Ron Artest isn't putting us on, and is actually this peculiar in private. I imagine him wandering around like the Tracy Jordan character in 30 Rock, saying stuff like "What is this, Horseville? Because I’m surrounded by naysayers. Wordplay!" and "I love this cornbread so much, I wanna take it behind a middle school and get it pregnant."

But maybe I'm wrong. Maybe Ron is actually a socially-conscious preppy boy who's just playing a role and pretending to be a little slow, just like Jessica Simpson (she's just pretending to be that way, right?). But I hope he's not. I hope he's 100% this nutty through and through. Why? Because we all know that a world without a trippy, wild-eyed Ron Artest would be a boring one indeed. If I can't look forward to Ron Ron next deciding to change his name to Mike Brown just to screw with his new coach, then what else do I have to look forward to?

Listen to me now and believe me later, Lemonjello Fruitalicious....

Don't put it in your mouth if you're not prepared to swallow it, Mike Brown....

....you be as bat s*** crazy as you want to be, number 3715, because I have a Dinner for Schmucks to attend and still haven't found my and-one (just watched that movie - God it was great. I mean, not 10-bucks-at-the-movie-theater great, but happened-upon-it-by-accident-on-HBO-On-Demand great for sure).

Here's a final Ron Artest nugget of fun for you, courtesy of Jimmy Kimmel. If you haven't seen it, you're in for a treat:

Grizzly63 said...
He seems like a really nice guy. What professional athletes do some of the thing he has done; who sells their championshp ring for charity.

And in the Jimmy Kimmel skit he had a lot of patience, he never got angry, put up with a lot of stuff, especially considering he is obviously terrified of snakes.

He has turned his life around, it is nice to see a positive stories about a NBA player, he can call himself whatever he wants, looking forward to see WORLD PEACE on the back of his jersey.
8/10/2011 12:28 PM

Also FWIW, last I heard, Prince was back to answering to "Prince" again.