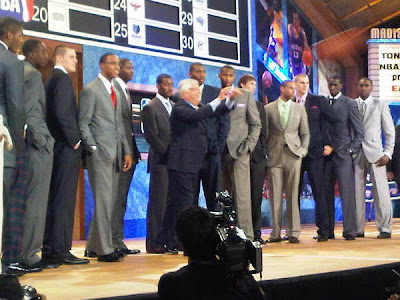 The Dude Abides said...
I think Minny should get some extra credit this time for cornering the market on mediocre wings, just like they drafted the worst PG out of the eight drafted last season (plus taking a PG who refused to play for them), then signed another PG to a four-year deal (and this one can't shoot but needs the ball in his hands), then introduced an offense that none of their three PGs are suited for.

So this time they take a SF in Johnson, trade for another one in Webster, and then trade draft picks to get yet another SF in Lazar Hayward. To me, this is hilariously bawful. Two years in a row they stack up at one position with mediocre players!
6/26/2010 4:27 PM

Anonymous said...
That the third pick averaged 12 and 8 for nothing special college team tells all there is to know about this draft.

DeMarcus Cousins = Benoit Benjamin? That's the same as wishing death on someone.

Like many others, you seem to fall under the spell of the Eternal Nelson, when the odds are he's gone before August. The consensus among the most rabid GSW fans is that this pick sucks the root. Derrick McKey-like would be considered an outstanding achievement.
6/26/2010 4:33 PM

to be fair to the Timberwolves, the "system" that everyone is harping on may not actually be what Rambis has in mind for the team in the future. from what I understand, reading/listening to some his interviews, Rambis views the triangle as a sort of learning tool. take that as you may.

Anonymous said...
Is Sean Elliott 2.0 a bad thing? Keep in mind he was an all-star. I doubt Wesley Johnson will ever make an all-star team.

The Dude Abides said...
@Anonymous...interesting. I wonder how much quickness Webster has lost due to his injuries, and I wonder how good a ballhandler he is. Still, the Hayward pick is very puzzling, considering Alabi and Whiteside were available and Minny has virtually no competent shotblockers (especially from the weak side).
6/28/2010 3:03 AM

AnacondaHL said...
On Minnesota: They get credit for the PG thing, but Atlanta's pretty much the leading expert in drafting a bunch of SFs.
6/28/2010 10:22 AM

Heretic said...
I stopped playing pickup games with guys I don't know after a 40 year old shirtless guy wearing jeans shorts went ballistic after missing his 15th consecutive shot. He just started yelling incoherently and babbling about ball hogs, mind you he shot the last 15 times. After that I try to stick to courts where I know the guys.
6/28/2010 11:15 AM

Unknown said...
I worry about an epic meltdown in Sacramento next year with Westphal coaching two young, if somewhat ballhoggy, studs. Should Westphal (and the rest of us) be worried that Sacramento's two best players were coached by Calipari?
6/28/2010 11:30 AM

Henchman #2 said...
Gotta defend my Cuse guy Wesley: He was on the Big 12 All-Freshman team, played his sophomore year injured and apparently in fallout with his coach, sat out the next year for transfer rules, and then was awesome this year (which was, technically, his junior year). I don't think "Didn't produce until his senior year" is a terribly accurate statement.

Also, I'm torn about the Andy Rautins to the Knicks pick. How can you justify calling Gallinari "The Rooster" when he is no longer the player on his own team who most closely resembles a rooster?
6/28/2010 11:40 AM

Unknown said...
Chris: Cousins and Evans should be better, but I wouldn't be surprised if I started hearing stories about the Kings trying to hire Calipari after next season. Given that him and Cousins have a "father/son" relationship and all. That, and Westphal has a history of clashing with some of his players.
6/28/2010 12:50 PM

chris said...
Sorbo: Having said that, Pauly W's clearly tried to make it clear (think the tradeoff of Discount Store) that this IS The Freak's house. Maybe that conciliatory behavior will help.
6/28/2010 2:36 PM

The Dude Abides said...
@BHP: Wesley Johnson might have been the right fit in Minny, especially since Cousins refused to work out there. The travesty is that several teams drafting right after Minny desperately wanted Cousins, and a competent GM would have pried an extra asset out of one of those teams by drafting Cousins.
6/28/2010 6:06 PM
Post a Comment
<< Home
Subscribe
RSS Feed
Mailing List