Since it's one of those crappy days on which I've got nothing better to offer you, here's something stupid I did last February right after Bonzi Wells and Mike James were traded from the Houston Rockets to the New Orleans Hornets. I had just picked up Comic Book Creator 2.0 and was having a blast messing around with it (which is why you might have noticed an explosion of word balloons here and in my Deadspin columns). This comic portrayal of the Hornets' post-trade press conference was originally created solely for the purpose of entertaining the Basketbawful crew...but since I'm suffering from a bad case of blogger's block, here you go. 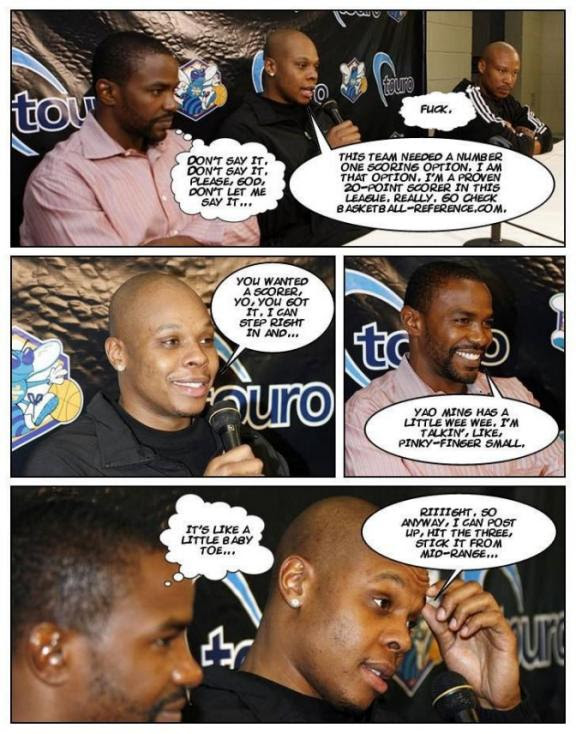 Anonymous said...
I just watched some Bill Walton basketball "sportskool" videos, and seeing him talking like a fool around grown men is priceless. At one point, after a big man wins a dribbling drill, he holds out his fist and say, "Blow it out big man, give it up." That's what she said.
8/28/2008 4:18 PM

But what really amazes me is that you see normal press conference photos and this what you think.

Anonymous said...
If it helps I thought the extreme ironing post was a hoot. They can't all be home runs. I continue to check this site 2-3 times a day just on the off chance you MIGHT be "on"... I won't complain when some of the jokes aren't "stellar"...

Particularly because you don't charge me. I mean jeeze Bawful... Chad Ford CHARGES me to read crap less insightful than this post... like say scouting reports on how amazing Yu Jilian is going to be.... (facpalms).

Anonymous said...
Hey I'd like to say that was all a joke about how nobody knew how to spell his name but no really i just can't type/spell.