Based on his Body Mass Index (BMI) and the miracle of modern eyesight, Shaquille O’Neal is the fattest basketball player in the NBA. So naturally he's set to star in a new reality show about weight loss.

"NBA star Shaquille O'Neal is doing a new weight loss reality show for ABC that is scheduled to air this summer. The as-yet untitled show will feature Shaq taking part in a campaign to help elementary and high school kids lose weight. The six-episode show is currently shooting in Broward County, FL."

There's something laughably ironic about asking somebody who looks like an old beanbag stuffed with bacon to help kids work the fat off. If Shaq can't even keep his own teammates from getting fat, I doubt he's going to be able to help 4th graders break that unfortunate "Twinkies 'n Gravy" habit.

It's amazing. Every time I think TV producers have exhausted every conceivable plot for a new reality show, idiocy gets revolutionized. I wonder who else was considered to star in this show. The finalists probably included Oliver Miller, Shawn Kemp, and Eddie Curry before they finally decided on The Big Fatty. What's the follow-up show going to be? Team Building with Isiah Thomas and Kevin McHale? Extra-marital Dating Tips with Kobe Bryant?

I'll tell you what changed my life: bullies. That's right. After years of having angry kids call me "fatass" while shutting me in a locker fully of dirty towels and jock straps, I finally started eating right and working out. Of course, I only did this so I could hunt each of them down and wreak a terrible vengence, Hannibal Lecter-style. But that's not the point. The point is, unless Shaq's prepared to terrorize these kids -- which for him would be pretty easy -- I don't see the kids dropping the weight. Unless Shaq eats all their food. Hey, I could be on to something... 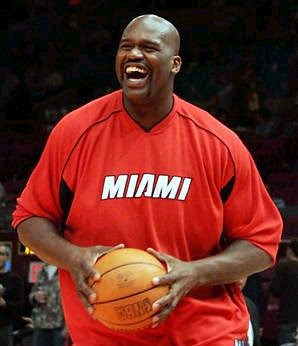 Do you want this man giving
your kids weight-loss advice?

Word of the Day
Previous Posts
OSU's new uniforms are Lebron-tastic!!
Girl impersonates Brad Miller
Newsflash: It's always been about the individual
Shawn Bradley: Where are they now?
Save the date: March 10th is Adam Morrison Bobbleh...
Our unathletic President
Worst of the Night: Minnesota Timberwolves
Shaun Livingston: "Why god? Why?!"
It's official: Eddy Curry is better than Shaq
Houston likes the ladies