The top-ranked Ohio State Buckeyes are getting new uniforms for the upcoming NCAA tournament. The new unis are form-fitting (supposedly to cut down on how often opposing players grab Greg Oden's jersey) and feature the same lettering used on the 1960 OSU jerseys (in honor of the year Jerry Lucas led the Buckeyes to their last NCAA title). Those changes make sense. What doesn't make sense -- Bill Walton: "In this dimension or any other!!" -- is the fact that the uniforms will also feature Lebron James' LBJ23 Nike logo instead of the traditional swoosh.

(Editor's Note: There are no pictures of the new unis available yet, so I did a Google image search for "LBJ23" with the intention of Photoshopping Lebron's logo onto an existing OSU jersey. Amazingly, one of the first results was the following image of Kobe Bryant grabbing Lamar Odom's ass. There was no way I could pass this up.) 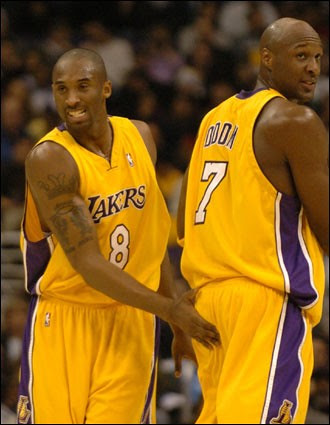 "Damn, dude! You been doin' Buns of Steel?"
There are things in life you expect to not make any sense. Crop circles. The popularity of Grey's Anatomy. The placebo effect. The female orgasm. The causal link between the popularity of Grey's Anatomy and the female orgasm. But can someone please explain to me why a college basketball team's jersey would feature the logo of a guy who didn't go to any college, let alone that college? Well, in the words of King James himself: "Why not the No. 1 team going into the tournament wearing my gear? It's going to be good for them and good for my exposure as well."

Oooookay. I guess this is part of the "Lebron as Global Icon" mission that Bill Simmons was talking about. Next up is a groundbreaking deal with Tampax, who are redesigning their tampons to fit more comfortably into the vagina while also featuring Lebron's smiling face. Now that's exposure. But, frankly, I'm not sure how wearing LBJ's logo is going to be "good" for the OSU team. Unless of course some of the money from the team's seven-year, $16.3 million merchandising contract with Nike gets redistributed directly to the players' wallets or applied to the loans on their brand new sports cars. Not that anything like that ever happens in college.

By the way, Ohio State's spin on this is that Lebron is a big fan of the school (he is) and that, if he would have gone to college, OSU would have been the choice. Said Ohio State coach Thad Matta, "LeBron is a Buckeye." Yeah. James is a Buckeye in the same way that every Irish American in the Midwest is an honorary Notre Dame pseudo-alumnus, which is "totally" but not "really."

Word of the Day
Previous Posts
Girl impersonates Brad Miller
Newsflash: It's always been about the individual
Shawn Bradley: Where are they now?
Save the date: March 10th is Adam Morrison Bobbleh...
Our unathletic President
Worst of the Night: Minnesota Timberwolves
Shaun Livingston: "Why god? Why?!"
It's official: Eddy Curry is better than Shaq
Houston likes the ladies
Take the Lebron Challenge