Ok, so Basketbawful is busy this week and asked me to put together a few posts for you. Anyway, this leaves me, Boston-bred Evil Ted, to entertain you basketball-hungry people. On the upside I have complete control, so maybe I'll go off on another rant about how Larry Bird is better than Dirk Nowitzki or Dr. J and prove it in a video game, or perhaps I'll eschew (gazundheit) basketball altogether and go off on how Tom Brady rocks for empregnating two, count 'em, two supermodels at virtually the same time. Yes, Payton Manning's commercials (like this one and this one) are superior, but Tommy Boy, in spite of his suspiciously homosexual photo shoots (highlighted so adeptly in the greatest music video ever), is doing his level best to put even the tiniest whispers of gayness to rest by launching his seed into Bridget Moynihan AND Gisele Bundchen (Nice Website Gisele - screwing a Web designer too?).

Can't you just hear the 3-time World Champ now? "I'm Tom Brady, dammit. I don't wear condoms." Uh, Tom, there's a little something called child support that says ya do; even the dumbest millionaires know that. Do you see Mark Cuban fathering any illegitimate kids?

Tom, now that the seed has been planted, at least take some advice now: hire some nannies pronto, my friend. I don't plan on hearing "We couldn't beat the Colts again this year because my kids won't sleep and my supermodel girlfriends don't change diapers." I want you tossing TD passes to an open Dante Stallworth, not Pampers to an open Diaper Genie.

OK, let's get to basketball...

Alright, it appears my beloved (or formerly beloved - thanks Danny Ainge) Boston Celtics are tanking the season, and may in the process get their hands on Greg Oden of Ohio State. Prior to this weekend, I had never seen Oden play, but I figured I'd familiarize myself with him since he might be a future Celtic, and because I have a tourny sheet to fill out, and it's nice to know a little about at least one team, so that I can feel like I did some research before I flush five bucks down the toilet (it's ALWAYS some chick who closes her eyes and fills out a sheet who wins, always - so unless you're a blind chick, don't bother).

They keep referring to this Oden as a freshman. This monster is a freshman? I mean, even when the Bulls took Eddie Curry and Tyson Chandler out of high school, those two looked like really big high school players. Oden looks like a MAN. An adult. Somebody who's icy stare could freeze Ben Wallace in a prison shower. I'd like someone to produce a birth certificate for this dude - the droopy jowels, the Bill Russell / Wilt Chamberlain facial hair, the pronounced, looming brow - this ain't no 19 year old. This is a 35-year-old dude playing AGAINST 19-year-olds...it's like when that "prematurely gray" guy won American Idol - nobody questioned age here? 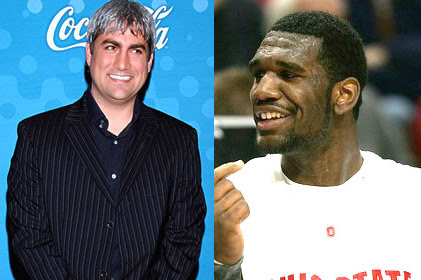 Taylor Hicks and Greg Oden: a 55-year-old and a
35-year-old both pretending to be 19 for fame and fortune.
I'm just waiting for Taylor Hicks to start endorsing Depends senior undergarments after he's done with the Ford commercials. And I'm waiting for that lost videotape of Oden honing his basketball skills in some Eastern European pickup league in the mid-90's.

As for Oden's ability, he's clearly a presence. He's bigger and stronger than everyone else - not by a little, by a lot - and when one of his guards throws a layup too hard against the glass, you know he's gonna be there to slam it home with authority over some poor bastard half his age. On one play during the big ten / pac-eleven / whatever tournament this weekend, he stood on one side of the basket, reached full across the paint with his enormous wingspan, and tipped an errant shot off the glass and in with a couple of fingers that would, in a plane-crash-survivors-turning-cannibal situation, feed a family of four for three days.

On the whole, it's clear why teams are salivating over the 7-foot Oden. He's got some offense beyond the dunk, he times the block with precision, and he has the build to match anyone currently in the NBA. On the other hand, if Danny Ainge gets his incompetant mitts on Oden, I'm certain he and the Celtics will find a way to turn him into the black Greg Ostertag. In the NBA, everyone is closer to Oden's size - and AGE - and his dominance will not be nearly as pronounced - of course, I recall basketbawful and myself saying something similar about LeBron James before he entered the league (insert foot in mouth here). Would Oden be a fantastic compliment to Paul Pierce and the Celts? Absolutely, he'd be a great addition to any team, but the Celtics need more than a Ben-Wallace-with-a-little-more-offensive-skill to be great again.

OK, I'm spent - not in an "I just empregnated Bridget Moynahan and Gisele" way - just spent. I hope you've all enjoyed my little Basketbawful test drive... except for you, Danny Ainge, my mortal foe. Some day you will have to explain to a higher power what you've done to the Celtics - and when DJ is looking out from inside the Pearly Gates, may he have mercy upon your Mormon soul.

Tomorrow's topic: Do Mormons even believe in the Pearly Gates?

Anonymous said...
hey... how come no Kobe rips the past few days? he's been suspended for flailing (intentionally as we all know) his arms, legs, elbows and his magic johnson (remember denver). Show kobe some love and give him the attention he yearns.
3/13/2007 10:33 PM

Anonymous said...
Hilarious! Please tell me you're going to continue posting along with Basketbawful when he gets back.
3/14/2007 12:26 AM