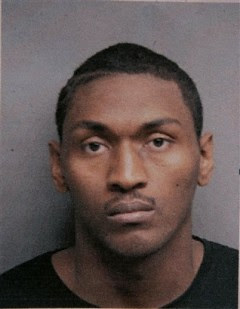 I said several months ago that the Sacramento Kings were just looking for an excuse to get rid of Ron Artest, and Artest finally gave them that excuse when he was arrested for domestic violence last night (and of course we've included a gratuitous mug shot picture for your viewing displeasure).

The gist of the story is this: Artest got into an argument with a woman in his home. He shoved her down multiple times and tried to prevent her from calling the police. She eventually did call 911, and threw a pot at his Hummer as he tried to leave (shattering his windshield in the process). The nature of Artest's relationship with the woman was not released, but there was a 3-year-old girl in the house during the incident. The woman also sustained undisclosed injuries, but declined medical attention.

Artest hasn't been suspended, but he has been removed from the team. Geoff Petrie, the Kings' president of basketball operations, released a statement that said, "The Kings have excused Ron Artest indefinitely from any further participation with the team due to his arrest today for domestic violence."

What can we take from this? Other than further proof that Artest is missing that special part of the human brain that tells normal people it's not okay to attack fans and toss women around. And now we have yet another chapter to add to the Legend of Ron Artest, to go along with his job at Best Buy, the smashed TVs, yanking down Paul Pierce's shorts, The Brawl, asking for a few months off to promote his rap album, the trade demands, his dog getting taken away, and so on and so forth.

It's been obvious for years that the guy has serious, "team handicapping" problems, and while Artest probably doesn't realize it yet, he's about a half step from being out of the league for good. Nobody wants him anymore, not even his own team. Head cases only get so many chances. Just ask Isaiah Rider. He was a certified 20-point scorer and then, two years later, he was out of the league. Poof! Gone. And it wasn't due to a lack talent. The same thing happened to Latrell Sprewell. This is why teams are willing to pull (or try to pull) guys like Reggie Miller and Scottie Pippen out of moth balls but nobody even mentions those other guys, who, for the record, did not retire of their own free will.

My guess is that Artest is gone within a year. Then, a year or so after that, there will be reports that he's gotten his act together and is planning a comeback. A few teams will show half-hearted interest, and maybe one or two will arrange for a workout...which he'll probably skip for personal reasons (ala Shawn Kemp). And that'll be it.

So if you're a Ron Artest hater, or if you get some twisted sense of satisfaction or joy when he screws up, I'd suggest you really take the time to enjoy this one. He won't be providing us with the free entertainment much longer.

ChrisH said...
remember when he was traded to the kings and Magic said this was his last chance. and he responded with "It's like saying, 'Magic, should your wife give you another chance? He's saying Ron Artest should have no more second chances. What's worse -- me saying I want to be traded or you cheating on your wife?"".

Word of the Day
Previous Posts
Boy impersonates Dwyane Wade
Shaq to help fat kids stop being so damn fat
OSU's new uniforms are Lebron-tastic!!
Girl impersonates Brad Miller
Newsflash: It's always been about the individual
Shawn Bradley: Where are they now?
Save the date: March 10th is Adam Morrison Bobbleh...
Our unathletic President
Worst of the Night: Minnesota Timberwolves
Shaun Livingston: "Why god? Why?!"