It goes without saying that Reggie Miller is a God among men, and His every action -- be it a game-winning three-pointer or even a simple fart -- should be given lordly praise and due reverence. Well hark and listen, mortal fools! Shortly after the Indianapolis Colts defeated the New England Patriots to earn a trip to Super Bowl XVILZwhatever, the clouds parted and the heavens shook with the power and majesty of His mighty voice:

"All the pressure is on [Bears quarterback] Sexy Rexy. I don't think [the Bears] have enough offense. All the pressure is off Peyton, because his arch-nemesis, his Lex Luthor, his Kryptonite, has been Tom Brady and the New England Patriots. They have solved that. Now in South Beach, on a neutral site, in warm weather, you are not going to stop Reggie Wayne and Marvelous (Marvin) Harrison. You're not going to stop those two. It won't even be close. They're going to destroy Chicago. Destroy Chicago. It won't even be close."

So speaketh The Reggie. Okay. Maybe He was a little drunk when He said all that, but can you blame Him? Historically speaking, life as an Indiana sports fan is like being a heterosexual male at a lesbian biker bar: sure, they'll let you into the party, but you're only going to get your ass kicked and go home with an inoperable case of blue balls. So when your team finally gets to go home with the lipstick lesbian who was just kind of confused about her sexuality, a little celebration is perfectly justified. Anyway, feel free to get a second mortgage on your house and bet it all on the Colts...the almighty is on their side.

Miller also touched on another point that the press hasn't been talking about: how Tom Brady is a classless douchebag failed to congratulate Peyton Manning after the game.

"I'm a little miffed that when the game is over and Peyton is looking for you, that you run into the locker room. I'm a little miffed at that, knowing how hard this man has struggled and you've been the guy who has always knocked him down. C'mon. Show Peyton a little love."

It's true, too. After the game, Brady just turned around and stalked off the field without a backward glance. Our clumsy human words can't begin to describe what a dick move that was. Here's a guy who's won three Super Bowls, and he can't just suck it up and be gracious in defeat? It's sad. Do a quick Google image search for "Tom Brady and Peyton Manning" and you'll find several pictures of Manning congratulating a victorious Brady after the Colts' past playoff failures. Manning stood tall and took his medicine -- and heaps of criticism for "choking" in big games -- but Brady wouldn't.

And how was this not news? After getting sacked into oblivion in last year's playoff loss to the Pittsburgh Steelers, Manning stated the obvious: the Colts had protection problems. Going into this year's playoffs, the press was still skewering him over that comment. And the so-called "Manning Face." And about how he throws his arms in the air and shakes his head when he's frustrated. These things have been used repeatedly as Exhibits A through Z in the case of "Peyton Manning is a choke artist." Yet when Tom Brady yells at his receivers for dropping balls, or when he throws his water bottle down in disgust, or when he stomps off the field like a spoiled child who just had his Optimus Prime taken away...the press either looks the other way or uses it as further proof of how badly Brady wants to win. Why?

Simpy put, there's a double-standard in our society for "winners" and "losers," and it carries over into the sports world. If you lose and complain about something, you're a whiner. If you win and act like an asshole, you're just "intensely competitive." For example, when the Patriots beat the San Diego Chargers, they mocked their fallen foes by imitating San Diego's Shawne Merriman and dancing on the Chargers' team logo. When the Chargers' superstar and league MVP LaDanian Tomlinson -- who's a real class act, by the way -- complained about it, he was immediately labeled a sore loser and the Patriots antics were more or less dismissed as the "exuberant celebration of a team that had just won the biggest game of their season."

It's the same kind of hypocrisy that allowed Michael Jordan to relentlessly abuse his teammates without taking a significant hit in popularity. So what if he beat up on teammates and made them cry... he just wanted to win! Even if it meant punching out Steve Kerr over a game of Tiddly Winks. And in America, nothing is as important as winning and being a winner. After all, if you don't win "the big one" (whatever that may be), you will be remembered as a loser and all your accomplishments rendered meaningless.

I guarantee you that, if situations were reversed, if New England had prevailed and Manning had left the field without congratulating Brady and the Patriots, he'd be getting eaten alive in the press, and we'd never hear the end of it. It would be brought up year after year...until Manning finally won a critical game, of course. Which is what he did on Sunday, and now all the critics are backpeddling and talking about Peyton's redemption and how he's finally achieved greatness. Well guess what, people? Manning was always great. Just like Dominque Wilkins was, and Charles Barkley was, and John Stockton and Karl Malone were, and Jim Kelly was, and Dan Marino, and so on and so forth.

And yeah, Brady's great too. But greatness shouldn't give you the right to be a bad loser. Hey, everybody called out the Pistons in 1991 when they walked off the court without congratulating the Bulls for finally beating them en route the the NBA Finals. Brady should be called out too...and I guess that's what I just did.

Photo-tastic Extra: Since I can't show you a picture of Tom Brady shaking hands with a victorious Peyton Manning, Here's a picture of Brady getting sacked by a Colts defender. It's my favoritest picture right now. Is that because it looks like Brady's being anally violated? I think I'll keep that to myself... 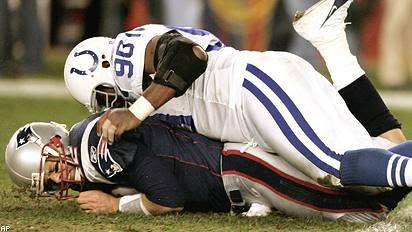 Suck it up and give the man a reach-around, Tom.
Coaching Superdickery: Where did Brady come by his superdicker? Could it be...his coach, Bill Belichick? Watch "The Genius" (apologies to the late Lenny Poffo) totally ignore Peyton Manning and then give the least helpful post-game interview of all time:


Let's not forget about how he brutalized that camera man a few weeks ago:


And afterwards? He dropped an F-Bomb while explaining the assault:


We really should expect more from a winner. But we don't.

DBrooks said...
Bill Belichick is one of the biggest assholes in sports. When he was at Cleveland, he was almost universally loathed. His press conferences at Cleveland were similar to his postgame comments above--muted, lethargic, and meaningless. Now that he is a "genius," people seem willing to put up with his antics, but he is still the same asshole he was in Cleveland. There are only a few teams and individuals in sports that I enjoy watching lose--Belichick is right at the top of that list, and I relished the closeups of his face after Brady's interception. If he went winless the next 3 seasons, it wouldn't cure me(and most of those who had do deal with him regularly in Cleveland)of my distaste for him. However, it might make his obvious lack of character and personality a more appealing topic for the media. It couldn't happen to a more deserving prick.
1/24/2007 7:58 AM

Anonymous said...
I think the reason you haven't heard any bad talk about Brady's lack of class is because the press has a east coast prejudice. I noticed Brady walk off the field also and immediately thought "what a jerk" too, but I figured he was just in a hurry to have Giselle console him.
1/26/2007 11:04 AM
Post a Comment
<< Home
Subscribe
RSS Feed
Mailing List