According to the world's leading proctologists, human beings are divided into two distinct mammalian subsets: Those who want to do something dangerously insane, and those who just want wrinke-free clothing. Well, a brick has finally been removed from the Wall of Hate and Confusion seperating these two proud peoples, thanks to the batshit crazy sport known as Extreme Ironing. 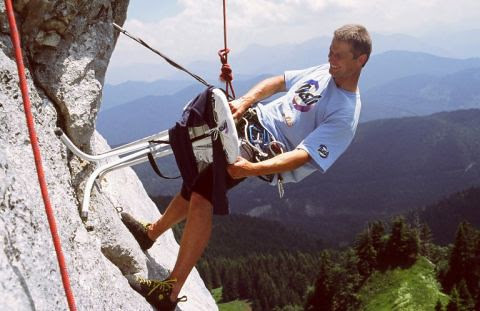 This is the 2002 Extreme Ironing World Champion. Ironing on the side of a goddamn mountain.
Wikipedia describes Extreme Ironing as "an extreme sport and a performance art in which people take an ironing board to a remote location and iron a few items of clothing." I know, I know. Sounds totally lame, doesn't it? That's the kind of crappy description you can expect from a free encyclopedia written by non-encyclopediologists. And let's face it, reading that definition certainly isn't going to convince otherwise normal people to iron their new suit from the back of mutant grizzly bear.

The description on the official Extreme Ironing Bureau FAQ does the sport a little more justice: "It is an outdoor activity that combines the danger and excitement of an 'extreme' sport with the satisfaction of a well pressed shirt. It involves taking an iron and board (if possible) to remote locations and ironing a few items of laundry. This can involve ironing on a mountainside, preferably on a difficult climb, or taking an iron skiing, snowboarding or canoeing."

Holy hard nipples, Batman! If that doesn't make you want to go out and make sweet, wrinkle-free love to a hot iron on some desolate mountaintop, you probably don't even know where your genitals are. (Here's a hint: Look down.) I can't count the number of time I've been mountain climbing or skiing and thought, "Gee, I'd really like to get these creases out of my pants...right now!" But then, that's probably because I can't count.

Call me stupid, but I don't really understand the reasoning behind taking a mundane task and making it needlessly life-threatening. Why not just rig your toilet to explode when you flush it, or cut the brake lines on your car, or take a bath with your toaster. I guess what makes Extreme Ironing different is the fact that you might actually survive, even if your friends and family kind of hope you don't.

There was this once time when I made basketball kind of deadly. Evil Ted and I once traveled deep into the back alleys of Chicago looking for a pickup game, and somehow we ended up at a court where guys were playing ball in baggy jeans and wifebeaters...through which their guns were pretty clearly visible. For some reason, we actually stayed and played a few games. Evil Ted was pretty nervous, but I wasn't. See, I had protection. I'd stuffed a few girl scouts in my trunk just in case I needed to barter them for my life. Fortunately, that didn't have to happen, and you should have seen the look on those angelic little faces when I finally let them out of that hot, cramped trunk: It was like Christmas, a Barmitzvah, and Thomas Crapper Day all wrapped into one. 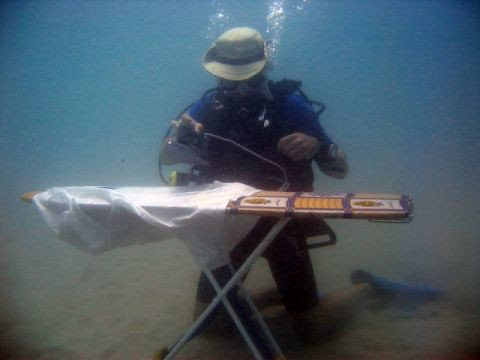 It's ironing, but underwater. Brilliant!!
I have to admit, I'm not entirely sold on the concept of Extreme Ironing. I mean, I already hate ironing. For me, "ironing" consists of stuffing my wrinkly clothes in the dryer for 15 minutes, or otherwise making someone else do it for me. It would take something pretty special to convince me to risk my physical well-being while doing tedious household chores. Like a tour of Area 51 or the recipe for Pizza King pizza. Until then, I'll just keep making those girl scouts do my laundry.

Victor said...
Does anyone actually enjoy ironing? Whose idea was it to do "extreme chores?" What's next? Extreme bathroom scrubbing? Extreme dish washing? Extreme vacuuming?
8/27/2008 3:45 PM

Anonymous said...
Whatever, haters- this guy is obviously a BAD ASS

Anonymous said...
Wait a minute... how does the guy turn the iron on?

Shiv said...
Supposedly (and I saw this on some lame VH1 reality show, so it might not be very factual) there exists a market for pornography that involves naked people ironing. Could these somehow be related?
8/28/2008 12:06 AM

Anonymous said...
"brake lines," not "break lines"...no snarky get-yo-spelling-rite-foo comment. it happens to everyone even with spellchecker on (that damn spellchecker can't tell the difference between 'thorny' and 'horny'--trust me, you don't want to get into THAT with your professor)
8/28/2008 9:58 AM

AnacondaHL said...
Wasn't this idea made by HomestarRunner? It was one of the little secret buttons on one of the flash cartoons somewhere...
8/28/2008 11:42 AM