home cooking (hom kook'-ing) noun. The phenomenon in which the performance of a player or team improves dramatically when they get to play on their home court. This often takes the form of an increased number of free throw attempts for the home team and a conspicous number of non-calls for the road team.

Usage example: The Miami/Chicago series looked hopeless for the Bulls...until they made it back to Chicago for some home cooking.

Word Trivia: Jermaine O'Neal must not like the state of New Jersey. In the first two games of the Pacers' opening round series against the Nets, O'Neal had managed only 27 total points (on 8-for-22 shooting) to go along with 11 turnovers and 10 personal fouls. After the Pacers got blown out in Game 2, O'Neal openly criticized the officiating (a fairly common tactic during the Playoffs). He was fined $15,000, but it was worth every penny. The Pacers, feeling frisky in the friendly confines of Conseco Field House, got to the charity stripe 42 times. O'Neal shot 14 of those freethrows on his way to a game-high 37 points. Suffice to say, the Pacers won the game to go up 2-1 in the series. A few hundred miles away, the Chicago Bulls were also enjoying the taste of some home cooking. After two close losses in Miami, the Bulls received 46 foul shots while Shaq got into early foul trouble, followed by mid-game foul trouble, and finally end-of-game foul trouble. The result: a Bulls blowout victory over the Heat, all thanks to the chefs...er, refs. 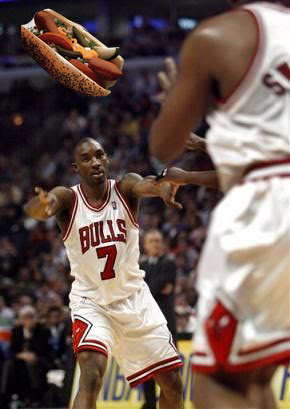 Ben Gordan says: "There's only one place we can get
a Chicago-style hot dog. And 46 free throws."

gfroese said...
The Bulls might have had 46 free throws, but Miami also had 33 of their own.

Anonymous said...
Ok, I'm sorry, but are you trying to say the only reason the Bulls went to the line so much was because they were at home and it had nothing to do with the fouls Miami was making? How 'bout the non call that would have been Shaq's 6th to Gordons face?
4/28/2006 2:42 PM

Basketbawful said...
Miami did indeed get 33 free throws. However -- and I should have mentioned something about this in the entry -- it's not just the number of free throws awarded (or not awarded), it's also the timing and manner of the free throws. A few calls and non-calls at a critical stage can radically alter the flow of the game, and irrevocably change momentum. And don't overlook the fact that Shaq's foul trouble completely altered Miami's attack.

Don't get me wrong. I know Miami got their fair share of home cookin', and no doubt will get another heaping helping of it when they go home for Game 5.

Of course, there's more to it than just home cooking. The Bulls are a perimeter team that relies mostly on jump shooting. They weren't as aggressive taking it to the hold in Game 1, whereas last night they became very aggressive. My favorite moment of the night was when Ben Gordon took it right at Alonzo Mourning and lofted a shot way up off the glass for the score.
4/28/2006 3:14 PM

Basketbawful said...
There's no reason to be sorry jimcognito, although your apology is sincerely appreciated.

At no point in my post do I say that any of the home-court calls are or aren't warranted. Officiating is an inexact science, and each call is based on the subjective decision making of fallible human beings.

The fact is, and this is no big secret, teams tend to get more calls at home than they do on the road. This is especially true in the playoffs. It's due, in part, to the fact that most teams are more aggressive at home than they are on the road. It's also due to the fact that, no matter what Davis Stern may tell you, refs are influenced by the crowd. And they're also influenced by a million other things we can't see or don't know about.

I live in Chicago, and I'm a fan of the Bulls. I read both Chicago papers and I listen to sports radio. I can tell you for an absolute fact that Coach Scott Skiles' biggest complaint about his team is the fact that they don't get to the line very often, and they tend to send their opponents to the line alot. So when a passive, jump shooting team gets to the line 46 times...it gets my attention.