Have you ever been making time with a pretty girl, only to eventually find out that things weren't exactly as they seemed? Maybe she waited two hours into the conversation before casually mentioning her boyfriend, or maybe her dad came running after you with a shotgun, screaming "She's only 14 years old, you goddamn pervert!" And while it's never happened to me personally, there's no shortage of Urban Legends about "That Guy Who Went Home With A Woman Only To Find Out She Was Actually A Dude." Whatever the situation, you end up feeling like a first class jackass. With blue balls.

Gabe Pruitt. The week before USC faced the University of California Berkeley -- with the Pac 10 Title and an NCAA Tournament Bid at stake -- Pruitt spent several days chatting over AOL Instant Messenger with a Cal student named "Victoria." The chatting got hot and heavy, so much so that Pruitt and several of his teammates made plans to go to Westwood after the game so that they could party with Victoria and her friends.

happened during the game goes down in the history books as one of the most evil, humiliating, and hilarious pranks of all time.

"When USC guard Gabe Pruitt took his first trip to the free throw line early in the game, the Cal student section hollered in unison: "VIC-TOR-IA, VIC-TOR-IA," and then yelled out a telephone number. Pruitt glanced back at the crowd in horror and bewilderment before clanking his free throws.

"It turns out that a couple of mischeivous little bastards from the Cal student section had been IM'ing with Pruitt all week under the identity of "Victoria," a fictional UCLA hottie, and Pruitt was eagerly anticipating a date with this nubile co-ed back in Westwood after the game. In preparation for the date, Pruitt had handed over his digits, which the Cal student section recited back to him in unison.

"Pruitt, a 79% free throw shooter this season, missed both shots after the "VIC-TOR-IA" chants began, and hit only 3 of his 13 shots for the game. Cal beat USC by 11 for the season sweep, in part due to the Cal fans' devious psy-ops."

Not since William Wallace was castrated by his arch nemesis in front of a group of his mortal enemies has a man been so painfully and publically emasculated. Take a look at the following picture. Pruitt tried to kind of laugh about it, but I'm sure Custer did the same thing right before the Native Americans owned his ass. Because if you can't laugh at yourself, well, then everybody else can. Oh, how they will laugh. 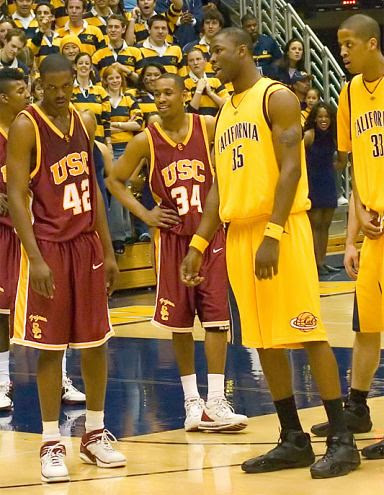 Pruitt tried to laugh it off, but his and his
penis's hearts were broken. Perhaps forever.
Funtastic Extra: Check out the following picture, which is also from the Gabe Pruitt Memorial Emasculation Game. Wonder what's going on? This answer may shock you: I have no idea. Either the USC guy is going to lauch the Cal guy into the stands, or they're about to start the most repulsive three-way in college basketball history. 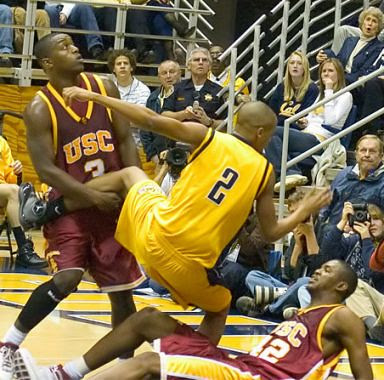