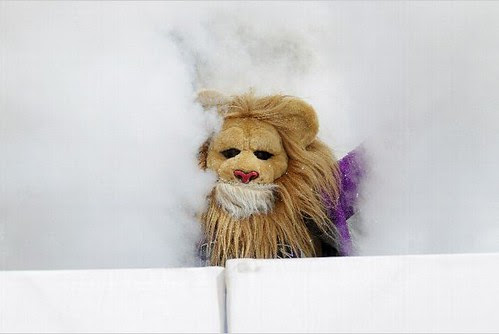 "We've rented this fog machine for the whole night, and damnit, we're going to get our money's worth!"
Mike Conley got a contract extension from the Grizzlies to the tune of $45 million over five years, and Hardwood Paroxysm is not happy about it. In fact, he went on one of the greatest rants in Twitter history about it. Check this Tumblr page that was created specifically to save this rant for posterity's sake. Some highlights: 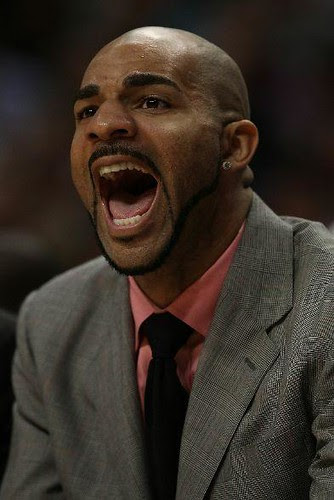 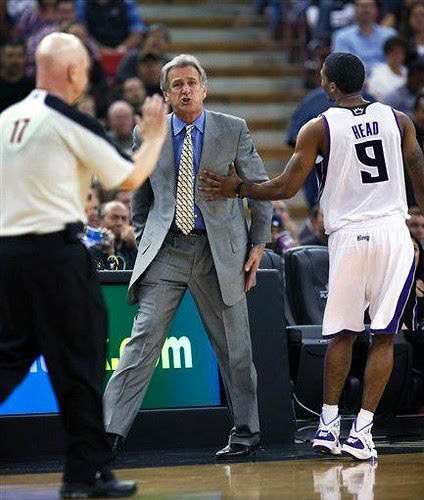 Shockingly, Luther Head didn't get a technical for turning his back toward the ref here!

Nationally Televised Games:
Grizzlies at Lakers, NBA TV, 10:30pm: Not the greatest way for the Grizzlies to start a four-games-in-five-nights roadtrip. I don't think the Lakers are going to let the Grizzlies get 22 steals like the Timberwolves did the other night. Just a gut feeling.

All The Other Games:
Hawks at Cavaliers, 7pm: Joe Johnson had this to say after his last game: "I'm a shooter. I've got to keep shooting." Indeed. I don't think the Hawks are paying him $124 million to not shoot.

76ers at Wizards Generals, 7pm: Holy crap the Sixers are bad. This game will be nearly unwatchable. Maybe the Sixers should temporarily be run by Red Klotz and renamed to the Shamrocks, Reds, Rockets, Seagulls, or Nationals.

Celtics at Pistons, 7:30pm: Shaq is hurt??? Impossible! Inconceivable!! In other news, wow. Rajon Rondo. Dude's just dropping dimes everwhere. He could find a way to get credited for an assist on a basket he shoots himself at this point I think.

Timberwolves at Heat, 7:30pm: The Heat's defense is just unreal right now. They're only allowing 80 points per game, and they haven't allowed a field goal to a starting forward in the last two contests. So, yeah, think I'm just gonna go ahead and mark down the Timberpups for their 14th straight road loss...

Magic at Knicks, 7:30pm: POSTPONED because it's raining asbestos! Congratulations on having such an up-to-date arena, New York. (Then again, it's probably just a time capsule from the last time the Knicks were relevant, so that's fairly appropriate) In related news, Eddy Curry will become the first player to be listed on a box score: "DNP (mesothelioma)."

Trail Blazers at Bucks, 8pm: The Blazers let Luol Deng go off for 40 points. I fully expect Corey Maggette to drop 60 on them tonight. That's not unreasonable, right?

Anonymous said...
Just wanted to point out that the Magic's last preseason game at the St. Pete Times Forum in Tampa was canceled due to bad floor conditions as well.

Unknown said...
What's amazing about the Conley deal is the Memphis now has $125 million between Conley and Gay over the next five years (about $25 million a year), while have $0 for Gasol after this season. My question would be, are these two worth one Kobe? Even one aging Kobe?

And what about that Gasol, will the Grizzlies trade him for Derek Fisher?

Since Gasol is probably leaving, what place would be a good fit for Marc? My picks are (in order) Phoenix, Sacramento, then Houston. He's going to be one of those guys who breaks out somewhere else, since Randolph won't be taking most of his possessions.
11/02/2010 4:25 PM

Less Inflammatory Name said...
Don't look now but Tracy McGrady went down and limped to the bench grabbing his knee.

The NBA: Where Joe Dumars being a genius GM happens!

Silvio said...
Cavs are so bad that Marv Williams just dropped 22 on them.

Jamario Moon's defensive presence is comparable with Sasha Vujacic's: lots of energy - but not even slightest effect. Jamario is yet another athletic player sticking in the league for no obvious reason. Unable to rationalize existence of such object (seemingly used only fro waste of both salary cap space and oxygen), writers start to refer it as "athletic defensive specialist". Defensive specialist my ... At least he's athletic, unlike Sasha.
11/02/2010 8:54 PM

Eric said...
Man, I'm not a Bucks fan but I feel sorry for those who are.

The Other Chris said...
@Silvio

I think the Cavs can compete for worst team ever. Yes, my mighty Dinos are pretty turrible themselves. But Cleveland.. good God. Their offence against Toronto basically consisted of:

a) fire up bad shot

b) try to get offensive rebound and putback

Lots of aimless dribbling around, lots of one-on-one by people who should NEVER be attempting to play one-on-one in a faceup situation (JJ Hickson, I'm looking at you).

Jamario Moon.. couldn't stick with TORONTO. 'Nuff said. The guy can't shoot, I cackled with glee everytime he touched the ball against the Craptors.
11/02/2010 9:48 PM

49er16 said...
Aldridge played 44 minutes tonight for the Blazers. You would think a team with an injury history like Portland wouldn't play on of their star players so many minutes in only the 5th game of the year.
11/02/2010 9:53 PM

kazam92 said...
Jamario Moon is an enigma. In his brief stint in Miami it was feast or famine. He actually can hit 3's when left open but he FORCES the absolute worst shots and I don't believe he's ever made a contested jumper. His athleticism is astounding though.

Honestly though, Marc Gasol is not his Brother, and although he is a nice center, he's not a feature player, let alone a superstar. But I think they could trick somebody into believing he is, and get good value for him. Hell, the Knicks thought Jerome James was a superstar after playing hard in one playoff series. And based on recent transactions (Mike Conley wtf), nothing would surprise me at this point.

Now, this was an overtime game, so 53total min instead of 48. Still: this is an amazing contrast that, on its face tells me that Kirk Hinrich is terrible. Yet common sense and experience tells me that he does not suck, and in fact is a good player. The rest of his stats (3/5, 8pts, 4reb, 9ast, 1to) indicate a very efficient floor game and good shot selection. Furthermore, he is well known for his above-average defense. So exactly how does he end up -14 in a 1point WIN for WAS?

This is exhibit A in "why the +/- stat just confuses the hell out of me and shouldn't be relied upon".

Andrei said...
John Wall is already making awesome contributions this season despite playing for the Generals. He was 1 steal short of joining Kevin Johnson and Mookie Blaylock in achieving a triple double where one of the categories is steals in the last 24 years: http://www.basketball-reference.com/play-index/pgl_finder.cgi?request=1&player=&match=game&year_min=1987&year_max=2011&age_min=0&age_max=99&team_id=&opp_id=&is_playoffs=N&game_num_min=0&game_num_max=99&game_month=&game_location=&game_result=&is_starter=&is_active=&is_hof=&pos=&c1stat=pts&c1comp=gt&c1val=10&c2stat=ast&c2comp=gt&c2val=10&c3stat=stl&c3comp=gt&c3val=10&c4stat=&c4comp=gt&c4val=&order_by=pts

Stockton said...
Does anyone has the list of number of back-to-back per team?
And number of games against opponents coming from back-to-back?

The NBA needs to make some schedule changes... with some divisions stacked with talent, and others being a complete desert, something needs to be done to fix the disparities...
11/03/2010 5:43 AM

AnacondaHL said...
Stockton - Basketball Prospectus did a quick overview for this season. Maybe if I have time, I'll toss it in a spreadsheet and share it.
11/03/2010 8:35 AM

Unknown said...
@AK: Yeah, you're right, Marc's no superstar, but he's a very good pick-up for any team. He reminds me of Marcus Camby, in that, it seems like he's usually making the right basketball play.