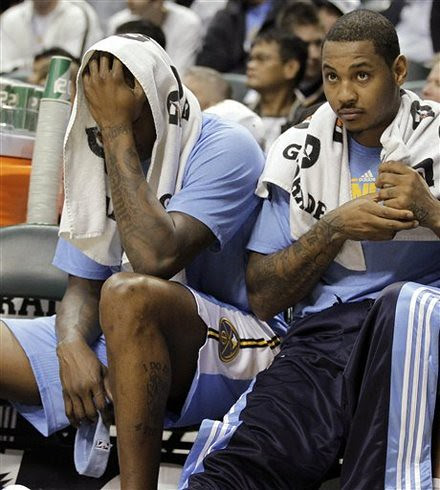 Yes another angle of this picture was in the WOTN, but damnit, it deserves to be seen again
After last night's absolutely unbelievable display of bawfulness, tonight feels like it should be a letdown night. But don't worry -- just look at the schedule! Terrible basketball will happen tonight, folks.

Just for the record, I already hate the Pacers since they essentially are the reason Louisville doesn't have a professional basketball team anymore. But also I'm going up against Chris in the Bawful Fantasy League this week, and he had two Pacers on his team. So yeah, I'm pretty much screwed this week. I know nobody cares about anybody else's fantasy team, but Chris demanded I mention this, so there you go.

Here's some news on Brandon Roy's gimpy knees, which apparently are getting worse and worse. The Frail Blazers legacy continues, sadly. Are we sure Brandon Roy isn't Greg Oden's long lost son?

SI's Jimmy Traina did a nice interview with Shaq (since, you know, it's not like Shaq has anything better to do right now). Among other things, we find out that one of his favorite movies is Don't Be a Menace to South Central While Drinking Your Juice in the Hood and one of his favorite TV shows is In Living Color. Okay, so that's pretty cool. Respect to anyone who likes stuff from back when the Wayans Brothers were actually funny. Speaking of In Living Color, want to see Isiah Thomas and Patrick Ewing show up in a skit? Watch this.

BAM!!
Worst of the Night in Pictures: 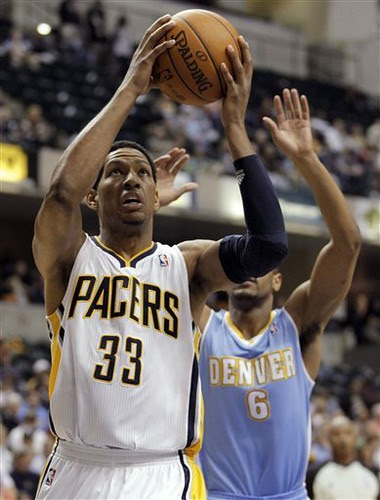 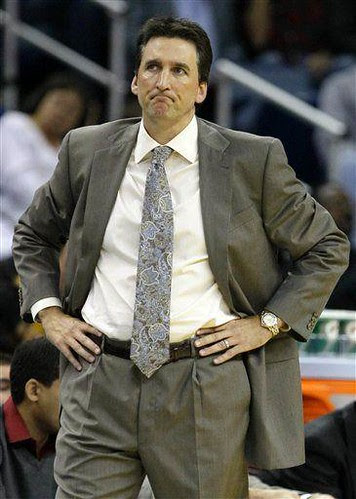 Theoretically this was taken last night, but this could be a stock Clippers picture for all I know 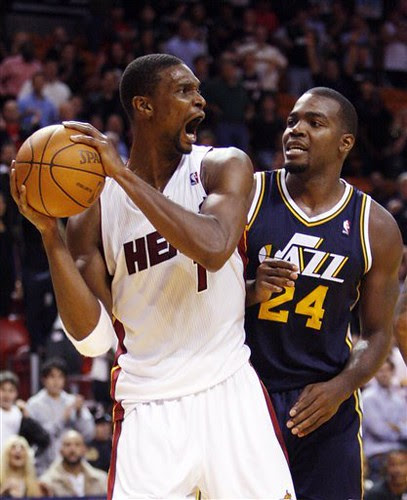 "Do I still have any broccoli in my teeth?" 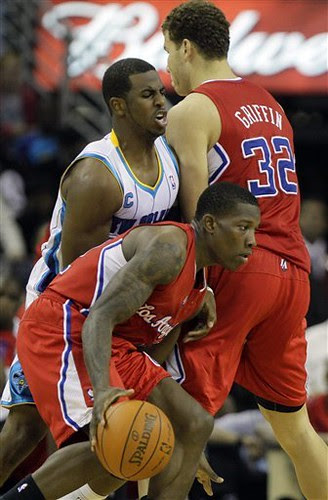 Kinda glad we can't see what Chris Paul is doing back there... 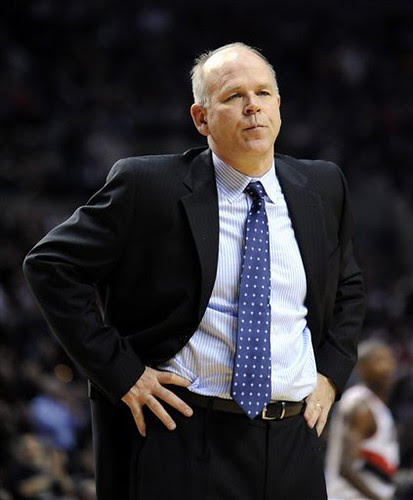 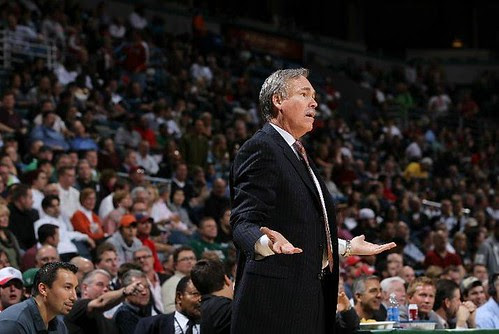 Mike D'Antoni doing what he does best 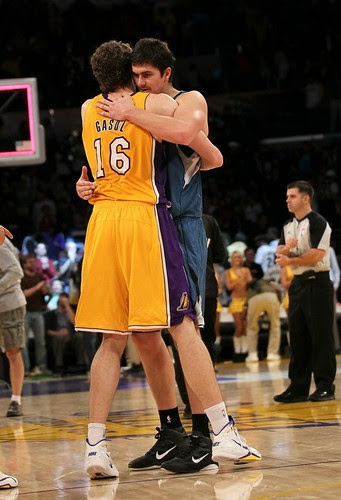 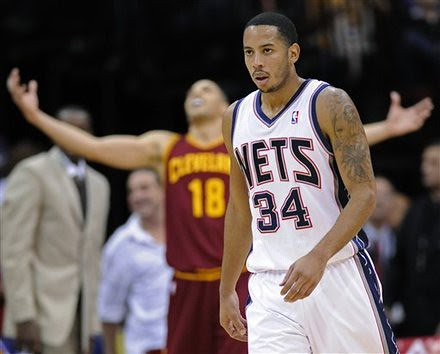 Clippers at Spurs, ESPN, 9:30pm: Another case of the Clippers being on national television for reasons I cannot begin to comprehend.

All The Other Games:
Bucks at Hawks, 7pm: So much for the 6 game winning streak to start the year. The Hawks are now 6-2, but chin up! The only fearing of deer that will be done this season is fearing they might jump in front of your car while driving at night. (You don't want to know about my story about that...)

Rockets at Wizards Generals, 7pm: To quote Silvio from the WOTN comments, "Tonight Rockets (1-5) at Generals (1-4). And that's even not the bawfulest game of the night..."

Bobcraps at Craptors, 7pm: THIS is the game we are annointing "BawulFest." Ughhhhh. I'm just going to let Homer Simpson do the talking for me on this one: "I've seen teams suck before, but they were the suckiest bunch of sucks that ever sucked!"

Also, to finish quoting Silvio's epic rant, "Things like that makes me mad. I mean, there's so much teams that have potential to mimic Nyets 10-72 season (if not "better" it with single digits win), but they're not allowed to fulfill their potential. Why? Because those crappy crap teams play each other night after night after night. Look at Cavs - 3 games winning streak as schedule gave them Sixers, Generals and Nyets. And tonight they get ... Nyets again. Not fair. Not fair that one team is going to get W. Clippers. After Spurs tonight, Clippers host Pissed-Ond and Nyets, travel to Timberpoops and Pacers, then play Knicks at home. They're bound to take some win(s) out of that soft schedule. Yes, even them. There should be some rule like: if both teams play bawful game - neither gets win. Or, winner gets only 1/2 of win. Or something, this way NBA administration is denying those crappy teams their right to have single digits wins season."

Nyets at Cavaliers, 7:30pm: Because, hey, if you didn't get your fill of bad basketball between these two teams last night, you get to do it all over again tonight! The NBA: Where Groundhog Day Without Bill Murray's Charm Happens.

Warriors at Knicks, 7:30pm: OMG this is David Lee's first game in New York since being traded!! Too bad nobody really cares.

76ers at Thunder, 8pm: Hey everyone, remember when the Thunder were good? What happened? Lucky for them the Seventy Suxorz are in town!

Mavericks at Grizzlies, 8pm: Okay, yes, the Mavs lost to the Grizzlies a couple weeks ago. But Dirk cut his hair! There's no way they can lose now!

The Other Chris said...
I will be attending said bawfulfest in person. I know you are all jealous. Who can snatch defeat from the jaws of victory, the Mighty Dinos or Larry Brown's Frankenstein group? Does anyone else in the NBA care at all? NO!!

Wild Yams said...
That stuff about Brandon Roy's knees is really disturbing and foreboding. Weren't knee issues one of the worries about him before he was drafted and the reason the Timberwolves wanted to trade him for Randy Foye? I can't find anything on that, but I thought I remembered something like that from back then. If Roy's knees are really deteriorated to the point where the Blazers' whole offense has had to be restructured, that's not at all a good sign about Portland's formerly bright future.
11/10/2010 4:32 PM

Sos said...
WOTN- Orlando Magic. Cough up a 3rd quarter 18 point lead to the Jazz, who were on the back end of a back to back, you know the OT game where they stormed back from 22 to beat the Heat. Pumaman was putrid, shot 4 of 11 freebies, and allowed Al Jefferson to shoot his half hook over him at will in 4th Quarter. The Magic who were hitting all there 3's in quarters 1-2.5 got a case of the Magoos when the Jazz started playing 2-3 zone and the difficulty got too easy. Credit to DWill, Millsap, AlJeff, and Sloan. Van Gundy and Pumaman FAIL!
11/10/2010 8:52 PM

Wild Yams said...
Are the Bucks for real? That team is really beginning to roll. Maybe the deer should be feared after all?

Charlotte & Washington - Welcome to your second win of the season.

Houston, we have a problem.

Unfortunately the Cavs loss tonight to the Nyets drops them below the Heat in the Eastern Conference standings. Dammit Cleveland.

Not much defense in the Warriors-Knicks game. Gee, what a shock.

Dan B. said...
I just got back from watching The Good, The Bad, and The Ugly with a couple of my friends. I see The Ugly was very prominent in the NBA tonight. Holy shit this week just continues to deliver the bawful!
11/10/2010 10:12 PM

49er16 said...
Watching Darko is something everyone needs to do at least once this year. He's the Mona Lisa of bawful. Just truly terrible to watch.

Example: Darko grabbed an offensive rebound against the Paupers and immediately turned the ball over. The ball wasn't stolen or anything. Darko tried to pass the ball, but he threw it to no one. And I mean, there was none of his teammates near the general vicinity where Darko was passing the ball.
11/10/2010 10:50 PM

Yes- Brandon Roy's knees were a concern even during his senior season at UW.

49er16 said...
Sorry for ranting all night, but the Paupers were just beat by Michael Beasley and Sebastian Telfair. Not Kevin Love or even Wes Johnson. Michael Fucking Beasley! And to pour salt in the wounds, Beasley made a throat slash gesture towards the end of the game. It felt like Beasley came into my living room and literally slashed my throat.

Anonymous said...
1. How does the Blazers medical staff still have their jobs? I could do a better job than them, and I've never taken a day of medical school.

2. I propose a name change... The Glass Wall should be referred to as Ow Ming. FFS.

"Think they miss Carl Landry yet?"

Wild Yams said...
Apparently Joakim Noah is no fan of Kevin Garnett's. Check out these quotes from the article:

"I had his poster in my room, I used to wear his jersey. And the truth is my rookie year, I was in admiration of this guy, and he kind of shut me down."

Silvio said...
With Turiaf injured and Mozgov benched Knicks allowed 74 points in the paint to Warriors. Add to that 23 free throws and that's 97.

@49er16
So Darko did intentional grounding although there was no real pressure? Damn, I miss all the best parts.

Stockton said...
Utah’s Paul Millsap is one of three players in the league averaging at least 20 points and 10 rebounds per game. Millsap is posting a team-high 24 points and 10.9 boards per outing, joining Howard and the Lakers’ Pau Gasol in the esteemed category.

As for Boozer, he leads the league in injuries caused by bags.

According to the Elias Sports Bureau, the Jazz are the first team during the shot-clock era to win three consecutive games after trailing by 10 at the half.