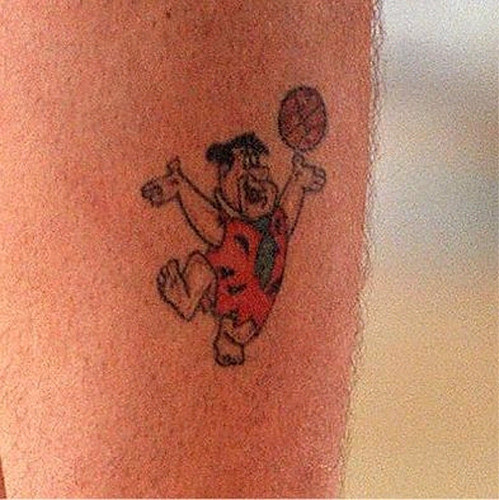 I look for any reason to re-post Greg Ostertag's Fred Flintstone tattoo.
Thanks to the wonders of Google, I noticed that today marks the 50th anniversary of The Flintstones. That, of course, gave me a perfect reason to re-post Greg Ostertag's wicked-awesome Fred Flintstone tat, which ranks second only to Brad Miller' Scrappy Doo tattoo in the all-time list of "Ridiculous Tattoos on White NBA Players."

Third place? Jason William's White Boy knuckle tat. Or Whit Eboy, depending on how you look at it. Classic.

Anyway, while we're here, I might as well post some more Flintstones-related bawful. For instance, take this video from the old NES Flintstones game. This is the kind of crap -- along with abominations like Deadly Towers -- that made me fear electricity during my teens.

Seriously, wouldn't you love to see Fred and Enemy
as playable characters in the new NBA Jam game?
(Random aside: Back in the day, my buddy Statbuster actually gave me Deadly Towers as a birthday gift. You have to understand that, in the early 1990s, receiving a video game as a gift from a friend was virtually unheard of. I was shocked and honored. Until I put that thing into my Nintendo. Jamming a live rat full of rabies into the console would have been more humane and far less dangerous to my psyche. The best part? Statbuster refuses to admit this ever happened. He literally wiped it from his memory. I should probably do the same.)

Then there are these super-cool Flintstones-inspired Nike high top shoes. Really, Nike? Really? If I wore these to my pickup league, I think even the most passive person there would be compelled to beat me to a gruesome and bloody death with my own footwear. And I would thank them for it. 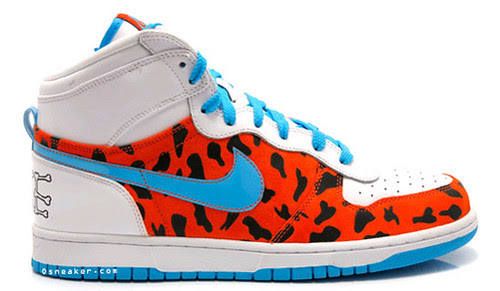 Only $109.99 on eBay! What are you waiting for??
Happy birthday, Flintstones.

chris said...
Random aside: Back in the day, my buddy Statbuster actually gave me Deadly Towers as a birthday gift.

Unknown said...
Are these ironic tattoos or on-the-nose tattoos?

Deadly Towers...reminds of some of my worst NES game session, like when my friend invited me over to play some his entire NES library . That library consisted of Bible Adventures and Exodus: Journey to the Promised Land, starring Moses. Poor guy.
9/30/2010 12:33 PM

David Robinson said...
I think I just enjoyed the fact that 1.That was a full court 1 on 1 game with Fred and Enemy. and 2. They beat the everloving shit out of one another. I guess that's how you play prehistoric basketball? who knew?
9/30/2010 2:07 PM

Now I can't criticize Lebron without being a racist. You might as well shut down the comments section, Bawful.
9/30/2010 2:08 PM

Unknown said...
E-Rob (yes, E-Rob) also had a Fred Flinstone tat on his forearm. He was from Flint, MI and he and his running mates in high school called themselves "The Flintstones" because of it. Isn't it alarming how much I know about E-Rob? I loved that guy. When he was permanently placed in the doghouse, he was averaging about 16.6 ppg, good enough to lead an atrocious Bulls team. I believe the issue of contention was that he wouldn't stay late after practice, to which he responded with something to the effect of "If you want me to stay late, just make practice an hour longer". I believe he then played a bit with the Austin Toros of the NBDL with another undervalued Bull by the name of Marcus Fizer (seriously, one time Cartwright sat him for a month straight until injuries forced BC to start him. Fizer went BEYOND animal-style 30-20).

Also, E-Rob was accused of faking injuries, but then he couldn't even pass the physical when Zeke wanted to bring him in to save the Knicks...and these physicals are not that involved. He was last heard from somewhere in the Bahamas, no doubt living like a king with the $60 mil or so that Krause paid him. Honestly, I would have lived my life in exactly the same way had I had the talent.

Dan B. said...
I think I just enjoyed the fact that 1.That was a full court 1 on 1 game with Fred and Enemy. and 2. They beat the everloving shit out of one another. I guess that's how you play prehistoric basketball? who knew?

Greg Oden knew. In fact, he was originally schedule to play against Fred Flintstone instead of this other scrub, but had to withdraw at the last minute with a knee injury.
9/30/2010 2:41 PM

Marc d. said...
I gave my buddy Street Fighter 2010 for the NES when we were little.

Any mention of Street Figher- even that abberation of a game- gets you a +1 from me.