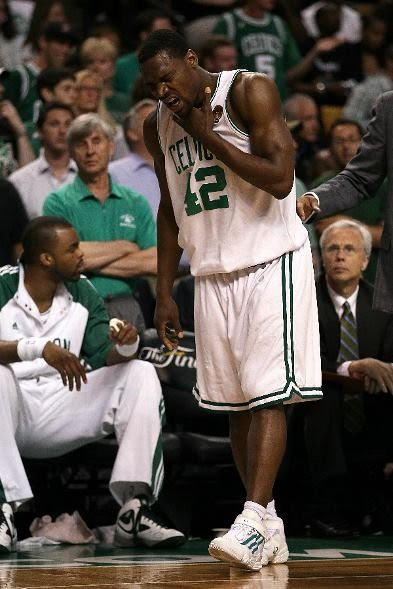 Tony Allen must have seen a replay of himself taking a jumper
Fantastically random website of the day: Shaqtion. "Shaqtion replaces these complicated inches and pounds with something that everyone can relate to: Your size, relative to Shaquille O'Neal." 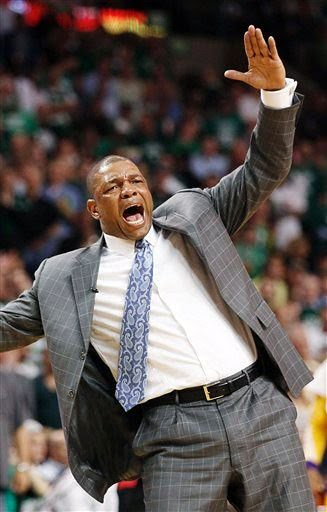 Doc complains about flopping, but then flops after contact with The Invisible Man. Hypocrite. 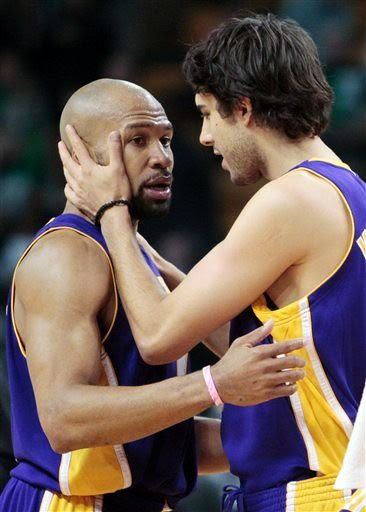 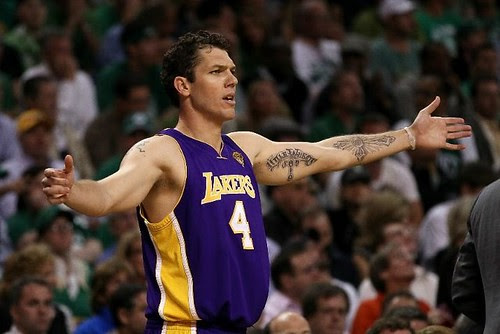 Okay, seriously, is Luke Walton in on the joke, or is he just that oblivious? 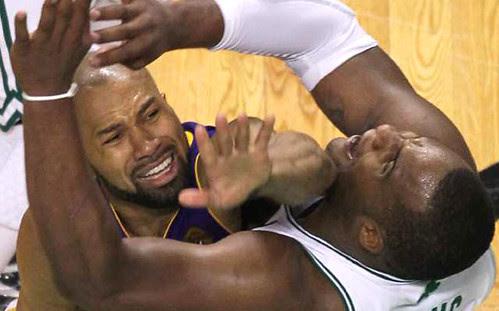 This looks like it'd fit right in a movie in super slow motion.... "Noooooooooo!" (Alternatively, "Baaaaaaaall!")
(via Basketbawful reader Sorbo)

Alright Celtics, you're only down one game. You barely lost Game 3 despite Ray Allen having a historically bad shooting night and Paul Pierce spending most of his night perfecting his disappearing act for his off-season magic show. Don't stop believing!!!

Uh... on second thought, maybe we need a different motivational method. Hopefully Doc Rivers was working on that when he wasn't developing an actual rotation to develop bench players that would also give his starters valuable rest.

(h/t chris for the video)

they also factored in weight right?

Sorbo said...
That must be one of those ironic hipster versions of "Don't Stop Believin'" That singer did a double-whammy on me senses, making my ears and eyes bleed. Although, a group wearing graduation outfits: sounds like it could be good a Devo cover band.

As a former middle hitter, that face shot brought back memories. Nothing is more satisfying than sticking it in some guy's face (yes, dirty quote machine), especially backline players.
6/10/2010 4:43 PM

Will said...
What exactly constitutes a "legendary bird watcher"? (besides watching birds of course)
Hopefully when David Chase goes to hell, he has to listen to that "rendition" of Don't Stop Believin' for all eternity.
6/10/2010 6:29 PM

Anonymous said...
Make sure you enter your height in inches or it doesn't work correctly.

At first it told me I am 0.28 Shaqs which is mathematically impossible.

Sorbo said...
Feel good about the Lakers tonight. Everyone is predicting a Celtics victory (just like Game 3), but with the quick turnaround, I'm not so sure the Celtics will be fresh. If the Celtics training staff "work on" Allen and Pierce the way they "worked on" KG (wink-wink, steroids), then I'm worried.

Oh, anyone hear any stories of Celitcs fans harassing the Lakers at their hotel yet? I assume a fanbase that pelts buses with rocks would poison some food or at least pelt hotel windows with rocks.
6/10/2010 7:47 PM

senormedia said...
I'll pay good money for a large poster of Big Baby with all the spit/drool hanging down from right before they went to commercial.

Wild Yams said...
Told you I wasn't feeling good about the Lakers tonight. I just knew their sense of urgency wasn't gonna be the same as Boston's. LA is better when things are more dangerous for them or when it comes to closing teams out, but they tend to relax in games like this one.
6/10/2010 10:44 PM

Karc said...
BTW, that's now the 3rd time Byrant and Gasol have scored at least 20 points each in a playoff game, only to lose. Lakers obviously thought they were playing the Suns by giving up 36 in that final quarter.
6/10/2010 10:48 PM

Unknown said...
Crap, I knew I shouldn't have said anything about Nate. He's the only Celtic I don't despise with the intensity of a million suns and he has to be all effective.

I can't feel too bad about this loss though. Refs seemed a little too eager to swing things the C's way in the last five minutes but it's not like the Lakers were taking advantage of what they got on the offensive end. It was kind of a sloppy offensive game for both teams, actually. At least the number of fouls called seem to have decreased.
6/10/2010 10:51 PM

Glenn said...
Right now on ESPN.com they have Glen Davis slobbering. HILARIOUS!!!! I screencapped, will post if needed.

Siddarth Sharma said...
That volleyball video, makes me wonder if it's legal to just dribble a basketball up court, face up your man and chuck the ball at his face/nuts? Unsportsmanlike conduct maybe.
6/10/2010 11:07 PM

TransINSANO said...
Regardless of the last 2 games being in LA, Lakers should be worried. Celtics have played bad enough in this series to get swept, but Lakers have played bad enough that it's 2-2 and the Celts suddenly have that nasty 2008 swagger. Conversely, the Lakers had that 2008 vintage, "we really want to win too, but the mean men in green won't let us" look in the 4th quarter.

BTW, I guess we can leave Doc alone about his bench rotations. Maybe I was too quick to laud Phil for leaving Kobe in practically the entire game every night.
6/11/2010 2:25 AM

zyth said...
im honestly waiting for Sheed to reaaally fuck things up with his whining/screaming and the following techs. also, who's ready to bet that P-jax will make a comment about how the refs were scared of Boston when Pierce hit one of them in the face?
6/11/2010 2:25 AM

I did see that, wrote a poem on it too. That was a different case, Rondo saved the ball from going out of bounds and inadvertently hit Varejao below the belt. My fantasy is for Rondo to dribble upcourt and without preamble throw the ball at Kobe's nuts, with full force.

Here is the poem:

The king was slacking around, taking a stroll through a garden.
when he was surprised by boos and hisses.
A lackey hanging around nearby, duty bound, begged for his pardon
and showed him a scroll on the wall, it read “TD garden”. (The King softly whistled)

For this was the prominent garden of Boston.
Home to Ray Allen and the grouch Kevin Garnett,
One’s a big man dominant yet doesn’t weigh a ton,
other, whose shots touch nothing, bar the net.

A win is a collective effort, pant and huff, timing, to avoid being on a poster.
I’m too lazy to make an effort to find stuff rhyming with the entire Celtics roster.

Coming right to the point
and looking at the man who mans the point
I’d like to make one small point.
This dude’s the smallest one in the joint.

I won’t go into details very gory.
Fact is the numbers don’t tell the full story.
They don’t tell of one man whose name can’t be rhymed or spelled.
Towards him a rebound, going out of bounds was pelt.
Made contact with a weird sound. Boing! Right below his belt.

Numbers don’t tell of the chasedown block attempted.
Where the King saw a cheesey layup, and was sorely tempted
to swat the ball with force into the stands,
followed by striking a kingly pose, a royal stance.

Rondo counted on that instinct
And as the King pounced on him by dint
of his atheletic pace, he saw with a squint,
a knowing look and a smile on the face of the half-pint.

The king bit on the fake.
Not to put his reputation on a stake.
but I haven’t seen anyone so fast and slow on the uptake.
Rondo being slippery like a snake,
whipped the ball behind his back to Tony for the make.

Back to the numbers:
29 points

A shimmying walker, goes the story, was once asked
“Why do you shoot so many 3s?”
In his dimming glory, the dunce basked,
and replied, “Bcoz there are no 4s”
Such mentality makes me sneeze.
Sneeze and puke my lunch with full force.

In contrast to this Rondo only attempted one 3 all game long.
Which he missed, in a game in which he couldn’t do any wrong.
Haters can nitpick if they wish.
No big deal that half his shots didn’t go swish.

No big deal, as he had 18 boards and 13 assists.
Great numbers on all courts where bball persists.

So concludes his great ballad.
But before I go to eat my salad,
I express a hope, a small plea,
That everyone agreed with the crowd, who chanted MVP

Bill Foster said...
When did so many retards become followers of basketbawful? Can't all you fuckers fuck off back to fucking Truehoop?

Sorbo said...
Can we get a WotN for Lamar Odom? I know his numbers don't suggest it (10 pts, 5-10 FG, 7 rebs), but at some point in the fourth, the guy stopped hustling and playing defense.

Pau basically disappeared in the fourth again. You can blame Kobe (which you will), but at some point Gasol needs to man up and take over (at least for one quarter while Kobe sits).

Bill Foster said...
Will - I always found the joy of this blog to be the humorous and ever so slightly cantankerous or curmudgeonly musings on all matters NBA. Reading through some of those comments particularly posted in the last WOTN section made me realise that the influx of new goats crossing the bridge should be spayed for the future good of goatkind.
6/11/2010 9:29 AM

Basketbawful said...
And I hope that Phil realizes Bynum is the best Big Baby stopper (and not Khlomar). Bynum has both size and length on BB.

I think the real problem is that Bynum is hurt. 12 minutes in the first half, none in the second.

If Bynum is rendered ineffective for the remainder of the Finals, it will be a huge blow to the Lakers. Fortunately for them and him, there's an extra day off before Game 5.
6/11/2010 9:31 AM
Post a Comment
<< Home
Subscribe
RSS Feed
Mailing List