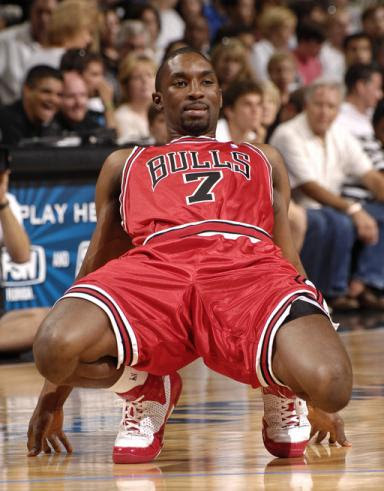 Boston Celtics: I'm not saying that that this team has lost focus now that there's nothing left to play for...actually, you know what? That's precisely what I'm saying. The Celtics turned their effort on and off all night, cruising here, making a run there, hitting big shots and then committing careless mistakes (they had 20 turnovers). The up-and-down, sometimes lackadaisical play led to a 109-95 defeat that gave the Wizards, a potential playoff opponent, more confidence than they probably deserve. Not a big deal, maybe, but you never want to give your foes any type of psychological advantage going into the postseason.

Doc Rivers: Doc couldn't quite decide whether to rest his stars or go all out to beat Washington, so he did the worst possible thing: He yanked The Big Three but then put them back in the game because the score was still close in the fourth quarter. The end result? He didn't rest his stars or win. Paul Pierce played 37 minutes, Ray Allen logged 36, and Kevin Garnett put in 30. Okay, KG got some rest, but what in the name of Lincoln's wart was Ray-Ray doing on the floor that long? We've been hearing all season that Allen's fragile ankles now have the relative durability of two dowel rods wrapped in toilet tissue. If there's one Celtic -- besides Sam Cassell, that is -- who should be sitting, it's Ray Allen. Save him for the playoffs, Doc.

Brian Scalabrine: Everybody's favorite candlepin bowler-slash-instructional video star actually got some PT last night. He would have scored a one trillion, but he gonked a shot and committed a turnover. Which, now that I think about it, is even sadder than getting a trillion.

Maurice Ager: There's our one trillion of the night. Thanks, Maurice.

Ben Wallace: It's good to see Big Bum disappoint somewhere other than Chicago. Wallace's line against the Nets: 1 points (0-for-2), 4 rebounds, 1 steal, 1 turnovers and the worst +/- score on the team (-12).

The Nets' fourth quarter: New Jersey started the quarter down by two points, but they quickly went up by one when Bostjan Nachbar hit a three-pointer. The Nets didn't know it at the time, but their first field goal of the period would also be their last; they went 0-for-19 the rest of the way. And so New Jersey got outscored 28-9 in that final stanza and lost 104-83. Mind you, their very playoff lives were at stake. You hear that, Nets? It's a bell tolling for thee.

Chicago Bulls: It's official. They're not even really trying to win at this point. And Ben Gordan -- who last summer announced that he's the best player on the team -- said it's hard for the players to motivate themselves with nothing to play for and no reason to care. Said Gordan Gordon: ''Anybody who says it isn't, is not telling the truth."

Well, you're wrong, Ben. There's at least one Bull who still cares: Rookie Joakim Noah. And he had some strong (and refreshingly frank) words after the game. Said Noah: "'Losing is like a disease, it spreads throughout the whole team,. It's really hard right now, because regardless of what we do, there's no light at the end of the tunnel, especially for this season. I feel like we're not really playing with a lot of pride and respect for the jersey. It's just hard because you can't point at anybody individually. You can talk about Florida, but if you're a Bulls fan, I'm not a champion anymore. We're losers. We lose. We're losers. That's all there is to say." He's not wrong."

And Noah wasn't done. ''There's going to have to be a serious team talk before the end of the year about approach to every game; the things that are going to be tolerated and the things that aren't going to be tolerated. Not the little, stupid things. I'm talking about winning; the sacrifices that need to be done in order to win.'' Amen, brother. Amen. Say whatever you want about his maturity or his hideous jump shot, but the kid is focused, intense, and dedicated to winning. I wish whatever he has would spread through that lineup. In the meantime, the Bulls have stolen the Chicago Cubs' mantra: Wait 'till next year.

Patrick Ewing: From Odenized. You know that fat lip Dwight Howard's sporting these days? It's a little something Ewing likes to call "payback." Still, I figure Stan Van Gundy might prefer if his assistant coach didn't endorse injuries to the team's superstar until after the playoffs.


Isiah Thomas, quote machine: With his team riding a three-game winning streak -- and yes, that's a season-high -- Isiah is all bright eyes and wistful smiles. "Finally the spirit of the team is good. The camaraderie of the team is good. I just think that they’re a team now. A little late, but nevertheless." Wow. It took him only four years to make them a real team. Congratulations, Zeke.

Mark Madsen: We had a Mark Madsen signing! He played 4 minutes and had 1 rebound. That's it. Did you know this is Madsen's 8th NBA season? Wow. And I said Kwame Brown was going to be out of the league soon? What was I thinking?! There's obviously always room at the end of an NBA roster for a big, talentless stiff.

Seattle SuperSonics: In the two games they've played since dropping 151 points on the Enver Nuggets, the Sonics have scored 83 (on 38 percent shooting) and 80 (on 36 percent shooting). A few more bricks, and they'll be ready to build their new stadium from scratch!

San Antonio Spurs: Memo to Gregg Popovich: Shaq is not dead quite yet. Pop decided to stick with single coverage on The Big Resurrection, and his team paid the price for it. Shaq scored 8 points in the fourth quarter, including two huge hooks over Tim Duncan that gave the Suns what turned out to be an insurmountable lead over the defending champs.

Matt Bonner: Ugh. Three trillion. You, sir, are a disgrace to the name "Matt." I say you return that name for something for fitting, like maybe "Poindexter" or "Booger."

Bruce Bowen: What? Bowen pulled a move out of his Dirty Player Aresenal especially for his team's game against the Suns? I can't believe it. (I'm kidding. I can totally believe it.)


Amare Stoudemire: After getting the old atomic elbow from Bowen, Stat tried to go all hombre on him. "Bruce came elbow first. Elbowed me right in my rib cage. You know, definitely wasn’t a basketball play on his part and I reacted. I definitely didn’t appreciate it. So, I let him know about it." Stoudemire is crazy athletic, and he's an amazing scorer. But he is so not a tough guy. Button the lip, Amare, and let Shaq be your hombre, okay?

Shaq: The Big Cactus played well, but he got a little grandiose after the game (as he is wont to do). Said Shaq: "I'm still the baddest 36-year-old ever created." No offense, Shaq, but you're wrong. The baddest 36-year-old ever created was Karl Malone. Take a look: 25.5 PPG (on 51 percent shooting), 9.5 RPG, 3.7 APG, and -- if you're into advanced stats -- a PER of 27.1 which, according to John Hollinger's handy reference guide, would have made him a "Strong MVP Candidate." Nobody has ever played better at 36. Not even Kareem. (Seriously.)

stephanie g said...
Every washed up, injured super star who goes to Phoenix starts to play like their old selves. Do they have a fountain of youth? Steroids? What's going on? Shaq was beasting last night. He shut Duncan down in the fourth and his hook shot was like a blast from the past.
4/10/2008 10:33 AM

Wild Yams said...
I find it thoroughly ironic that the Spurs main weakness right now is they can't match up with the bigger teams out there, and that the Suns are one of the bigger teams. More than anything, that's what I saw in last night's game. Oberto & Kurt Thomas just are not cutting it at the center spot, and when Duncan's got to focus on guarding a good PF like Stoudemire it spells trouble for the Spurs. I'm hoping the rumors are true and that Andrew Bynum may be there for the Spurs-Lakers game on Sunday so we can see how San Antonio handles the other real big team in the West. Of course, the Suns were actually playing some defense last night, something the Lakers seem to have forgotten how to do.
4/10/2008 10:39 AM

Anonymous said...
if the fattest 36 year old on the court is your core of toughness, then color me unimpressed.

watching suns fans decree their toughness when shaq body checked 20 year old Amir Johnson, i knew what their toughness was. an act. a show that they could put on at specific moments to distract from the rest of the time (much like shaq's resurrected career).

amare had every right to be pissed, and i'm glad he showed some back bone. his newfound backbone will last long after shaq has abandoned phoenix and started talking trash about them.
4/10/2008 11:10 AM

Anonymous said...
That Sonics loss was especially pathetic considering the Rockets were resting T-Mac and Battier might as well have rested because he was limping around on a bad hamstring. The Sonics basically got their asses kicked by Rafer Alston and Steve Novak.
4/10/2008 12:05 PM

Matt said...
Fyi, the beginning of that Howard clip says that frightening Polish dude Marcin Gortat delivered the elbow to Dwight, not Ewing. So indirect payback, then.
4/10/2008 1:55 PM

HC Earwicker said...
I know that you’ve already included the Nets as a unit, but can there be some kind of special mention for Devin Harris? From the start of the third quarter to the five minute mark he managed to get fouled by Delonte West (non-shooting) and grab one rebound. The filler guy in the Kidd trade (Diop) played at a hall of fame pace in comparison.
4/10/2008 2:43 PM

Anonymous said...
Let me get this straight, the Spurs are on their way to losing a game, the Suns have the ball, and we get a cheap shot to a Suns player from a Spurs player. Um, where have I seen this before, Im getting an image...last year....umm..Suns vs Spurs..umm...Suns are going to win the game...but here comes a Spurs player, I think his name is Rob...umm...BOOM! I just relate this all to the Spurs being sore losers and taking their frustration of being dominated out on the court, well, um..on the court. Boo the Spurs, I can't stand to watch them.

Anonymous said...
Gordon / Gordan. I remember back years ago in college, when USENET was the thing, I read a basketball newsgroup. There was one fellow who made it his shtick to call Michael Jordan "Jordon" and slag on his "ballhoggedy" ways.

m. Alana said...
Oh, Jo. Good for him. I think Joakim just goes to show that sometimes it's good to be an arrogant young asshole. Remember when people were talking about how his supposed attitude problems?