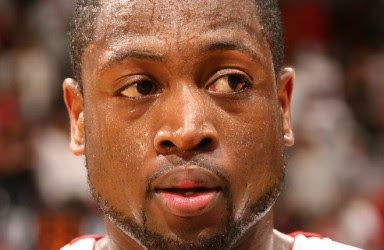 Dwyane Wade has the look of love suck in his eyes.
Just like a bad rash that won't go away no matter how many "herbal remedies" you order from illegal Mexican pharmacies, Basketbawful and Hardwood Paroxysm are back with another week of Powerless Rankings. This week, I'm walked into the Starbucks bathroom with a copy of War and Peace to take a long, hard poop on the East, while the men of the hard wood utilized their scatalogical skillz on the West.

1. Miami: Pat Riley was described as "joyous" after the Heat broke their 15-game losing streak. Pat, your team is 9-33. You should never feel joyous. As in, ever again.

2. New York: The Cloverfield Monster may have eaten the city, but the Knicks have done more damage to New York than ten of those monsters could have done.

Hardwood Paroxysm says: Oh, cute, they're 6-4. Get your season tickets for next year, now! Good God, this team is dysfunctional. They're like the last season of "The Osbournes."

3. Philadelphia: The city of Philadelphia is home to the cheesesteak sandwich, water ice, soft pretzels, and TastyKakes. Oh, and the Sixers. But they won't tell you that.

Hardwood Paroxysm says: This team has lots of potential. Of course, as my father-in-law likes to say, "I'll never forgive you for marrying my little girl." Wait, wrong quote. "Potential only means you haven't done anything yet." Yeah, that one.

4. Milwaukee: I would rather watch old episodes of Laverne & Shirley than sit through a Bucks game. But only the episodes after Squiggy was introduced and before Shirley left.

Hardwood Paroxysm says: Have you ever wondered what it would look like if acid rain were to melt an NBA defense? Watch a Bucks game. That should give you a pretty good idea.

5. New Jersey: I wonder what Vince Carter has been doing since he stopped playing basketball. Do you think he's got a new hobby or two? Maybe collecting plastic spoons or weaving macaroni baskets? Wait, what? He's still playing? Are you sure?

Hardwood Paroxysm says: Sometimes, God decides to reward us all by punishing one of his children who is a douchebag. In this instance, the Lord has chosen Vince Carter as the Douchebag of Happiness. It's kind of like the Bluebird of Happiness, only with Schadenfreude.

6. Chicago: Do you know why they call Chicago "The Windy City"? Because the Bulls really blow.

Hardwood Paroxysm says: Next one to criticize Noah after the effort he's put in since the crappy suspension gets shivved. Oh, and they're injured. This should end well. They can just lean on "vaunted veteran leader" Ben Wallace for support.

7. Charlotte: Ever wonder why they're called the Bobcats? Well, according to Wikipedia, the Bobcats home is "marked with feces, urine scent, and by clawing prominent trees in the area." So I guess you have your answer.

8. Indiana: According to the Indianapolis Star, the Pacers will be renamed next season to "The Indiana Streakbreakers." The only people who are happy with the Pacers right now live in Miami. In fact, the Pacers make me hate myself.

Hardwood Paroxysm says: Danny Granger has overtaken Mike Dunleavy, Jr as the scoring leader of a professional basketball team. Our long, national nightmare is over. [Actually, check the stats: The nightmare continues. -- Basketbawful]

9. Atlanta: Remember that awesome seventh-game shootout between Dominque Wilkins and Larry Bird? Who knew that would be the Hawks' last great moment. And they lost. And it was 1988.

Hardwood Paroxysm says: When you realize that this team is looking to get annihilated in 4 games in the first round of the playoffs as a significant step up, it kind of makes you sad for Atlanta.

10. Toronto: Jose Calderon leads the team in assists, field goal percentage, freethrow percentage, and steals. People think he should be an All-Star. Teams want him. Have I been unconcious for a few years? What did I miss?

Hardwood Paroxysm says: "We can't beat good teams, but we can kick the crap out of bad ones. We're marginal. We're effective. We're Canada."

11. Washington: Everybody from here to Kazakhstan was talking about how great the Wiz had been playing on defense. I mean everybody. Even my great aunt Edna, and I'm pretty sure Edna died before I was born. Then, the very next game, Washington gives up 121 points on 56 percent shooting. Stat curse!

Hardwood Paroxysm says: Man, that Cavs loss should have rocketed them up in our rankings. Luckily for them, the rest of the East is so marginal, we can't justify punishing them any further.

12. Cleveland: You know what I never get tired of hearing? NBA broadcasters and analysts stating, with great conviction, that Lebron James is "a man!" In other news, the Cavaliers are "a basketball team," and they play in "short pants and jerseys," and I am "a dork."

Hardwood Paroxysm says: Sweet Mother of God, this team is one-dimensional. But that one dimension could kill you with it's pinky.

13. Orlando: After he got injured against the Timberwolves, Kevin Garnett said: "It felt like I got sniped from the rafters or something, you know." And I know the Magic were getting pounded in Detroit at the time, but Jameer Nelson wasn't traveling with the team. I'm not trying to make any accusations or anything, but I really hope that kid has an alibi.

Hardwood Paroxysm says: We'll just go ahead and call them the Bronze Magic, how about?

14. Boston: Every once in a while, I see a bug in the house and I squash it. But I don't celebrate. I don't ever celebrate. And the best team in the league should never celebrate when they beat the worst. Never, ever, ever. Rather, you should issue a public apology and take all your fans out to Chuck E. Cheese.

Hardwood Paroxysm says: "Yeah, we beat the world! We're world-beaters! No one has ever beaten the world like us! I play for Boston! the Boston Cetlics, yeah!"* Please note, * denotes where "world" is defined as "the Minnesota Timberwolves."

15. Detroit: Did you know that Rasheed was once engaged to a woman named Fatima? Nice name. She had two sisters, Uglyima and Dumbima, and a brother named Geoffrey. This Pistons team? Yeah, they're still pretty good.

Hardwood Paroxysm says: This team is like your big brother that lets you get some punches in and then slugs you, puts you in a cardboard box and then ships you to your creepy neighbor, via FedEx.

Anonymous said...
Hey I would just like to know how the Raptors beating San Antonio, Dallas, New Orleans, and Boston doesn't count as them beating good teams? Just curious an all
1/28/2008 1:40 PM

Tonewise said...
100% out of context, however this is just one of those links that needs to be shared with ppl that appreciate the awfulness...

Basketbawful said...
anonymous -- That's a damn good point. Damn good point. I can't answer you, though, because the HP guys wrote that one. You'll have to go ask them. I won't defend the statement since, as you pointed out, they've beaten some good teams (including Portland). It's probably the losses to the Cavs, Suns, and Detroit that HP was talking about...
1/28/2008 1:47 PM

Anonymous said...
But they beat the Cavs this year too ... and while dealing with injuries to Bosh, Ford, their muck-it-up guy Garbo and the tragic disappearance of Bargnani. Given the rest of the statement, it must have something to do with Canada and the fact their economy is kicking the crap out of ours ...
1/29/2008 3:43 PM