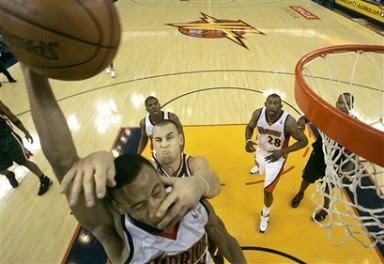 Cleveland Cavaliers: Just how bad are the Cavaliers without Lebron James? As it turns out, pretty darn bad. The Cavs suffered another humiliating beatdown last night, courtesy of the Gilbert Arena-less Washington Wizards. Cleveland's lowlights included: A 13-point second quarter (during which the Wiz scored 31 points); a 45-29 rebounding disadvantage; a 1-7 shooting performance by Sasha Pavlovic (who's gone 12-46 over the last four games); and seven minutes of Eric Snow (who scored zero points on 0-1 shooting to go along with his 1 assist and 1 turnover). But the worst sign of trouble for the Cavs is the fact that Shannon Brown led the team in shot attempts (14) for the second straight game, and this is a guy who's only played six games total all season. Brown had more shot attempts last night than Zydrunas Ilgauskas has gotten in the last two games (13). What's up with that? Anyway, Cleveland's losing streak has reached five games, and this skid will probably be used as Exhibit A in the Case of Lebron James Winning the 2008 MVP Award. (And hey, it's already happened.)

Fun fact: A rare (and ugly) Rubbermaid action figure of Zydrunas Ilgauskas is currently available on eBay. Get your Christmas shopping done early.

Kirk Hinrich and Ben Wallace: Not only did these guys throw up a double goose egg against the Bobcats -- both scoring zero points on identical 0-3 shooting -- they were both exiled to the bench for the entire fourth quarter in favor of Chris Duhon and Joakim Noah. Rightly so, as it turns out, as Noah provided energy (8 points, 2 steals, 5 fouls), Duhon provided leadership (12 points, 4-7 shooting, 9 assists), and the Bulls outscored the Bobcats 38-22 for a big come-from-behind win. Are the Bulls better without Hinrich and Wallace? Well, their +/- scores for the season are -89 and -61, respectively (Duhon leads the team with a +15). However, the Bulls best five-man combination is Duhon, Wallace, Ben Gordon, Luol Deng, and Tyrus Thomas. But hell, I don't even know what any of that means. What I do know is that the Bulls may have won, but they're still a mess. Skiles' rotation is less predictable than the stock market, but, in his defense, none of his players (with the possible exception of Andres Nocioni) has proven consistently reliable. Hinrich is playing like he suffered a serious head injury over the summer, Wallace is playing like an old man (mid-60s at least), and the jump shooters -- which means pretty much everybody -- are misfiring like they developed a group case of cerebral palsy. So Skiles is stuck searching for answers and, frankly, I'm not sure there are any. Seriously, I think it's time for John Paxson to make a trade. This team isn't going anywhere.

Fun fact: Two of the Bulls five wins have come at the expense of the Bobcats, which means Scott Skiles is probably already circling January 2 and 25 on his calendar.

Brian Scalabrine: He was last night's one trillion award winner in Boston's routine 113-103 win over the 76ers (losers of three straight and seven of their last 10). On the subject of that game, I might as well mention that Ray Allen shot a not very good 3-12, and the Sixers continued to struggle from beyond the arc (4-14 last night, and 9-51 over their last four games).

(Not) Fun fact: Before the game, Paul Pierce apparently "scolded a couple of teammates in the locker room who [were] having too much fun and screaming to some music." Said Pierce: "We're trying to play a game." Pierce then admitted that, last season, he "spent too much time telling his younger teammates what to do, where to go, what to eat, how to dress." Wow. Who knew Pierce was such a Fun Nazi? Oh, right, these guys.

The Raptors' "Defense": Yes, I know that their big guns are out due to injury, but that doesn't explain why they allowed the Suns to shoot nearly 60 percent as a team (on the second night of back-to-back games no less), score 45 points in the third quarter, and find garbage time for Eric Piatkowski, Sean Marks, Marcus Banks, and D. J. Strawberry. The Suns haven't played all 12 guys in a game since the preseason. Toronto's passive defense even brought Boris Diaw out of his offensive coma (14 points on 7-11 shooting). Said Raptors coach Sam Mitchell: "Our transition defense was just horrible." He probably should have added "half-court," "man-to-man," and "rotation" to the list of horrible defenses played by his team.

Fun fact: Steve Nash has dished 50 assists in his last three games. Also, he's currently shooting 54 percent from the field, 48 percent from three, and 94 percent on the line. Nash has officially transformed into some kind of basketball playing computer. He's just awesome.

Jason Kidd: He missed the Nets' feeble 100-93 loss to the lowly Knicks due to what was reported to be a migraine headache. But rumor has it that what Kidd really had was a throbbing pain in his ass, that pain being the wretchedness of his team. Kidd, who has no history of migraine headaches, appears to be upset that his team sucks, and that certain teammates --cough*VinceCarter*cough -- can't play through a little pain and discomfort. In a way, I can't blame him, because playing with Vince Carter would give me headaches too. But quitting on your team, even if it's only for a night, isn't cool.

Luther Head: He played 30 seconds last night and his stat line was just a bunch of zeroes. He only played 20 minutes and had two DNP-CDs in the five games before that. Remember when this kid was supposed to be pretty good? Head averaged 11 PPG last season, but he's fallen completely out of Rick Adelman's rotation. But I guess that's what happens when you're competing with Chuck Hayes and Steve Francis for playing time. That sound you just heard was Luther's mom's heart breaking.

Dallas Mavericks: The Mavs had to be pretty excited about getting a chance to face off against the Spurs minus Tim Duncan. Too bad for them that the Spurs appear to be the better team with or without their best player. The Mavs got outscored 31-17 in what turned out to be the decisive third quarter. Dirk Nowitzki continued to live up to his reputation for disappering in big games by scoring only 15 points (4-11), committing 4 turnovers, and missing a wide-open three-pointer at the buzzer that would have won the game (and Mr. MVP was the second option on the game-winning play). He wasn't the only Maverick who was playing more like Iceman, though; Devin Harris shot 2-11 and Jerry Stackhouse 2-9.

Fun fact: Trenton Hassell played 16 seconds last night. That gives him 26 seconds of playing time in the last two games. It's easy to forget this, since he hasn't been playing, but Dallas signed Hassell for his defense and toughness. That being the case, it might have been a good idea to unleash him on Manu Ginobili, who scored a season-high 37 points (12-24), 4 rebounds, and 6 assists despite a bruised finger on his shooting hand (ahem, Lebron James). I'm just saying, if you're going to pay a guy $4 million a year to play defense, you might as well let him do it.

Allen Iverson: He scored 51 points last night, but he only scored 2 points and missed his only freethrow in the fourth quarter as he watched Kobe and the Lakers steal the game. What's worse is that Kobe used Iverson as a prop as he performed a fourth quarter dance. The turning point of the game was when Kobe hit Iverson on the arm on a three-point shot attempt (no call) then ran over Iverson on his way downcourt en route to tossing a sweet lop pass to Andrew Bynum for a dunk. After that play, I knew the Nuggets were finished. Anyway, scoring 50 points and losing is kind of like showing up to the prom in a limo and wearing kickass tux but then watching some other dude walk off with your girlfriend. Not that that ever happened to me of course. But I bet it would feel like scoring 50 in a loss.

Fun fact: Has anyone noticed how well Derek Fisher is shooting the ball this season? He's shooting nearly 51 percent from the field (he was 6-11 last night). This from a 40-percent career shooter who hit 38 percent of his shots last year and has never shot better than 43 percent for a season. Fisher is very quietly having a career season, for which I have no decent explanation.

Los Angeles Clippers: They lost their seventh consecutive game to a the Seattle Supersonics (4-15). Cuttino Mobley shot 2-10. Tim Thomas shot 2-14. Chris Kaman is absolutely killing himself (19 points and 14 rebounds last night, 18 and 14 for the season) for no reason. I read one article that compared the Clippers to a rudderless ship. Hardly. It's more like a ship with no rudder, no sails, a faulty engine, several holes gushing water, and getting eaten by a giant shark. Ugly.

Fun fact: Chris Kaman spent much of his childhood on a chicken farm. Which makes sense, since he looks like the result of some mad gene-splicing experiment involving humans and chickens, and possibly Bigfoot.

Milwaukee Bucks: Last night, the Bucks continued their transformation from "better than we expected" to "league bitch" in a 120-90 loss to the Golden State Warriors. The 11-point second quarter is what killed them. That and the fact that they aren't any good. That may sound like a harsh statement, but they let Austin Croshere hit three three-pointers and throw down a dunk in the fourth quarter. What other conclusion am I supposed to come to?

Fun fact: Remember how the Bucks outbid the Miami Heat for Charlie Bell's services last summer? Think they're regretting that move now? Last night he scored zero points (0-5) and committed 3 turnovers in 17 minutes of action. It was the fifth time this season he's failed to score a single point. But even in those games, he fell only four points below his season average. He's currenlty shooting 26 percent from the field and he has almost as many turnovers (20) as field goals (22). And the Bucks have him signed for four more years and almost $15 million.

Five Pound Bag said...
Robert Horry somehow got a blocked shot to avoid the ignominious 6 trillion in last night's Spurs game. He's a veteran who knows how to do the little things in the clutch.
12/06/2007 12:51 PM

Basketbawful said...
flohtingpoint -- Actually, I've been waiting for a really good stinkbomb of a game from Caron to mention that. Unfortunatley (for me), he's been playing pretty well.

five pound bag -- Ha! Yeah, I was watching that game really closely hoping against hope to get a [some number] trillion from Horry. He must read the site; how else do you explain a 70-year-old man putting a block on somebody?
12/06/2007 1:09 PM

Anonymous said...
What about the Utah Jazz? They blew a 15 point to the Pistons who were on the second night of a back-to-back, not to mention that the Pistons played 4 games in 4 cities in 5 nights, Utah being the last team they faced in that stretch. And Utah was well rested and at home and lost by 15.
12/07/2007 10:31 AM

Basketbawful said...
al james -- I'm guessing you mean the New Orleans Hornets and not the Jazz (the Jazz didn't play on the 5th...but they did beat the Pistons by 10 in Detroit on November 25th). That being said, you're probably right...the Hornets performance probably deserved WotN treatment (particularly Jannero Pargo's 1-8 and Chris Paul's 4-14.
12/07/2007 11:11 AM