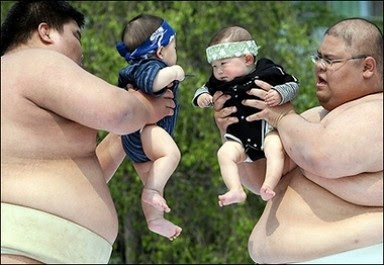 What it is: A contest in which two human beanbags clad in giant diapers "compete" by picking up a babies, facing each other, and then shaking the little bastards until they start start crying.

Who wins: The first baby to start crying. In the case of a tie -- i.e., they start mouth-blasting at the same time -- the loudest brat is recognized as the "shourisha" (which is Japanese for "flying Elephant trumpet"). The losing baby is then presented with a tiny ceremonial sword and forced to commit seppuku. Personally, I prefer the "frisbee method" of committing seppuku.

How it began: Japan is a land of mystery and ancient wisdom. For this reason, most of their daily activities are based on the fathomless principles of elder generations. This is also true of their sports. According to one Japanese proverb, "When passenger of foot heave in sight, tootle the horn." It was impossible to build a sport around that adage, however, since nobody knows what the hell it means. Another Japanese axiom is that "crying babies grow fast." For this reason, many people in Japan believe that the louder an infant screams, the more gods have blessed it. So in essence, Baby-cry Sumo was created to pray for a baby's health.

When it began: The art of terrorizing crying babies was first developed in Japan over 400 years ago. However, the first official Baby-cry Sumo event took place in 1993.

Special encouragement: Since Baby-cry Sumo takes place in Japanese temples, the priests act as ad hoc referees. They even assist in the contest by shouting and waving at the babies.

What it means to basketball: In the NBA, the defining characteristic of champions is known as "killer instinct." Many great players (Larry Bird, Magic Johnson, Michael Jordan) have it, while others (David Robinson, Karl Malone, and Dirk Nowitzki) do not. Very little is known about killer instinct or how to obtain it. However, I propose that anybody who is forced to duel another man armed with nothing but a screaming baby would either develop a killer instinct or be destroyed. So Dirk, wherever you are, I suggest a strict regimine of Baby-cry Sumo before the next season begins. After all, your legacy is at stake.

Anonymous said...
isnt it dangerous to shake a baby? thought the Japanese would know better (then again, theyre the ones who came up with hello kitty).
8/16/2007 12:19 PM

Anonymous said...
"So Dirk, wherever you are, I suggest a strict regimine of Baby-cry Sumo before the next season begins."

Anonymous said...
Dirk needs a nice regime of that.

Yes, I AM terribly critical of my team. But 67-15 really, really hurt and Dirk disappeared like that man David Robinson around ten years ago after he won that MVP.
8/19/2007 1:15 AM