Word History: During his first live telecast as a basketball commentator,

Magic Johnson's lips were firmly attached to Michael Jordan's lily-scented ass. He raved about every single thing "His Airness" did, whether it was the cute way he dusted his hands with talcum powder before shooting a freethrow, or how he wagged his tongue right before drawing a cheap foul. But the best part was when Jordan hit an average, ordinary layup only to have Magic exclaim, "What an espacular move by Michael Jordan!!" 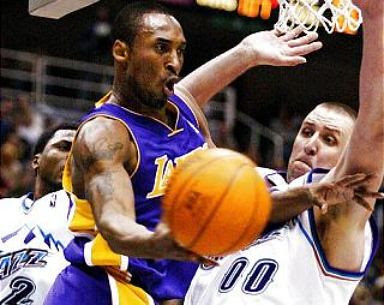 Ostertag inspires yet another espacular move.
Editor's Note: I can only assume that the above picture is the product of some kind of digital manipulation using Adobe Photoshop, because that certainly looks like Kobe's passing the ball, which we all know is medically impossible. Until proven otherwise, I'm going to assume that Kobe's intense look of concentration is simply the result of trying to figure out a way to get the shot off around Ostertag's hulking form.